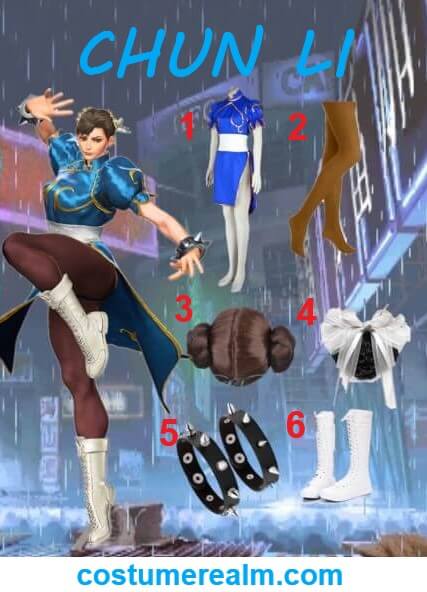 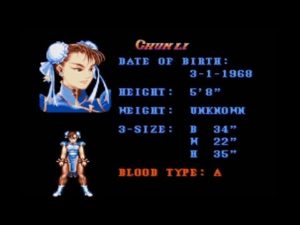 Chun-Li is a video game character from the Street Fighter series, which originally debuted in Street Fighter II. As the first fighter in the series, she is an experienced martial artist and Interpol officer, who relentlessly wants to take revenge on M. Bison for the death of her father. 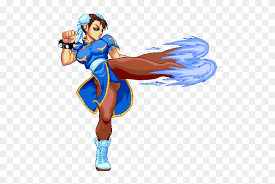 Chun-Li's appearance has changed many times in the Street Fighter series, as well as in official art pieces and cameos made in other works. She is known for her very muscular thighs.

Chun-Li wears a Qipao, a Chinese dress imported from Manchuria, which became popular among girls in the early 20th century. Her outfit is modified to offer a much wider range of motion than a normal Qipao. She also wears white combat / boxing boots of various sizes (such as calf-length in games such as the Street Fighter II series and older vs. Capcom titles or knee-high in games based on her 3rd strike sprite) and a blue leotard with dark brown sheer thinness pantyhose and a blue thong underneath with her qipao. Her Qipao is blue with gold accents. She was originally supposed to wear a peach-colored Qipao, as seen in her in-game profile, ending with the original Street Fighter II. Both arms have large, spiked bracelets with a black steel ring and white / chrome polished steel spikes. Complementary materials suggest that she wears Qipao in honor of her deceased mother, who died in her early childhood and whose only photo shows her in a Qipao resembling that of her daughter.

The metal bracelets with spikes, which they are known to wear, are made of iron and each weigh about 7 to 10 kg. Chun-Li also wears her to strengthen and train her body. The Qipao is equipped with weights to strengthen the strength and finesse of the body. The bracelets serve to balance the body during kicking, including stabilizing the center of gravity during a Hyakuretsukyaku and limiting the center of gravity of supers such as the Senretsukyaku, to overstress their muscles. The spikes are also used for intimidation.

In the time of Street Fighter Alpha she wore an embroidered vest, a body suit and sports shoes and studded bracelets. It is a bit unclear why she no longer uses this outfit and switches to Qipao in the following Street Fighter games. Materials say that this was worn during their days as an active detective for comfort. In the Street Fighter Alpha: The Animation movie, her vest was changed to red instead of blue.

In Street Fighter II V, Chun-Li wore casual outfits throughout the episodes, including a red V-neck sleeveless Qipao with a blue Obi whose loose straps on the right hang loosely, red Chinese pants, black Chinese shoes and she die Hair is tied into a high ponytail decorated with a long, blue laced ribbon and a yellow, sleeveless, short dress with orange ribbons (which resemble a skirt on the back). Among them are pink panties and yellow, open flats. When she was brainwashed, she wore her primary outfit, but with minor changes, the color of her Qipao is light blue with white accents, the front and back skirts are short rather than long, her brown tights are replaced with blue knee pads and her hair is let go.

In Street Fighter IV, Chun-lis's alternative outfit is a black sleeveless evening gown with gold accents below. She wears a black and gold sash held by a red rope belt. Red shoes, gold earrings and black and gold bracelets complete the outfit. The outfit is similar to the clothes she wore in one of the episodes of the animated series.

In various official artworks, she was also featured in her police outfit and (presumably) in her favorite casual wear: a plain jacket, a t-shirt, jeans, and white tennis shoes. An official art has been shown to wear her Alpha bracelets in casual wear.

In Street Fighter V, her first alternative costume is Street Fighter IV's sleeveless evening gown, and her hair is now loose. Her second is her police uniform, which is also combined with white, unobtrusive boots that resemble her earlier signatures. In all her costumes she wears a bright lipstick and a charming eye shadow around her eyes.

She receives new changes to her main outfit and her police uniform; Her main outfit is similar to the one she wore in Street Fighter II V, but she wears a sleeveless, modified Qipao with gold trim and instead of knee pads and boots she wears black thigh high socks and sneakers.

Her police uniform is her disguise form in Pocket Fighter, as the color of her outfit is indigo and her top is now