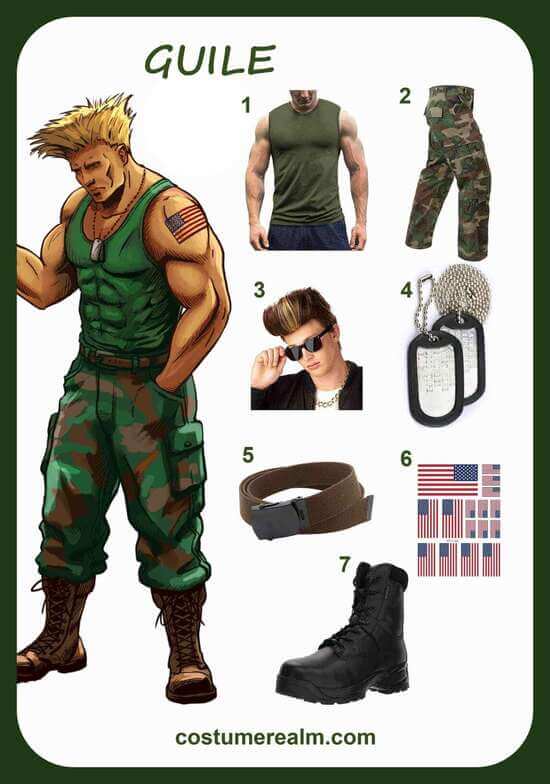 You need the following items for your  Guile Halloween costume: 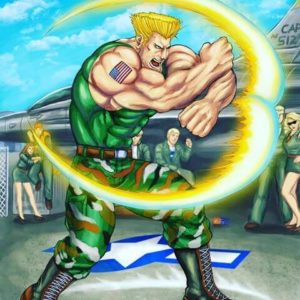 Guile is a video game character from the Street Fighter series, which can be seen for the first time in Street Fighter II. He is a major in the United States Air Force, whose goal is to end the Shadaloo criminal organization while investigating the whereabouts of his best friend Charlie Nash.

Street Fighter II's early sketches suggest that Guile was designed specifically for American fans. Its appearance is strikingly different from the many Asian characters in the Street Fighter series, with light blue eyes (green in Street Fighter V) without eyebrows, a chiseled jaw, a permanent expression of bad mood on the face and its most recognizable feature: a particularly high Haircut, The length of Guile's hair varies greatly from appearance to appearance; It's pretty realistic in Street Fighter II and incredibly big in SNK vs. Capcom: SVC Chaos. The Capcom sources say that Guile's famous hairstyle has a special hairspray to take care of it (although it will quickly be fixed after a match in the end).

Guile's all-American image includes military suits and tattoos with the United States flag on each shoulder. According to the United States Standard Protocol, the stars are on the left to give the illusion that the flag is heading for battle. The image of the uniformed American aviator is known in Japan because of the number of US military bases in that country.

Guile wears Charlie's dog tag next to his. In Street Fighter IV, one of Guile's alternative costumes resembles Charlie's costume.

In Street Fighter V, Guile wears a white shirt with military buttons and dark blue emblems on both sides, a matching dark blue tie on the collar with US emblems on both sides, and dark blue military pants with a black belt at the waist and black combat shoes. He wears his characteristic sports glasses as part of his standard costume and wears a blue ID card with his full name on the right and a gold eagle badge on the left.

His first alternative costume is his classic clothing in Street Fighter II and his second costume makes him wear a brown flake vest with a blue-gray army jumpsuit, the sleeves of which are rolled up into cuffs and a white undershirt. He continues to wear his sports sunglasses and black combat shoes from his main outfit and is wearing Charlie's dog tag and black watch from his main outfit.