You need the following items for your Cammy from Street Fighter Halloween costume: 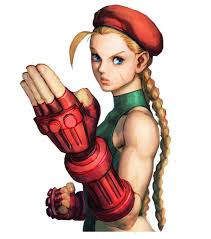 Cammy White, also known by the code name Killer Bee, is a video game character from the Street Fighter series, first seen in Super Street Fighter II. The second fighter in the series, she was once a deadly clone assassin who worked for Shadaloo before she freed herself and became a benevolent MI6 agent for the British government. 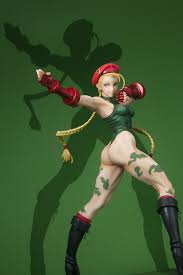 Cammy has light blue eyes and long blond hair styling her to two plaited braids, a large front lock and a scar on her left cheek. She has a muscular body with a very healthy physique and is slightly below average for a female Street Fighter figure. Cammy's choice of clothing is a jersey as it gives her more speed, agility and flexibility.

It enhances and complements her acrobatic and gymnastic fighting style, which requires her to quickly move and twist her legs and body, which Cammy can do effectively and comfortably in her jersey. Cammy relies heavily on her agility and skill, so wearing a jersey is best for her. So she can move with impeccable precision, grace and strength.

In the Super Street Fighter II and Super Street Fighter II Turbo, Cammy wears her signature outfit: a sleeveless green turtleneck thong made from a delta red triangle on the right or left breast (some promo items are on the right) while other examples, including their suffixes in SSFII, have it on the left), a red beret, red socks, and black calf-high combat boots and red legwarmers.

Her legs were sparsely embellished with inexperienced camouflage paint.
This classic incarnation is thought as "Delta Red Cammy".

In one of the earlier designs of Cammy's character design, she wears harnesses and a holster. These details are finally incorporated into the standard design of Street Fighter V.

In Cannon Spike, Cammy wears a similar outfit to her SSFII incarnation, except she has knee pads and inline skates and two submachine guns. In her right hand she holds a standard Uzi machine gun and in her left a scorpion vz. 61. Both weapons are shown as weird bigger compared to their real counterparts.