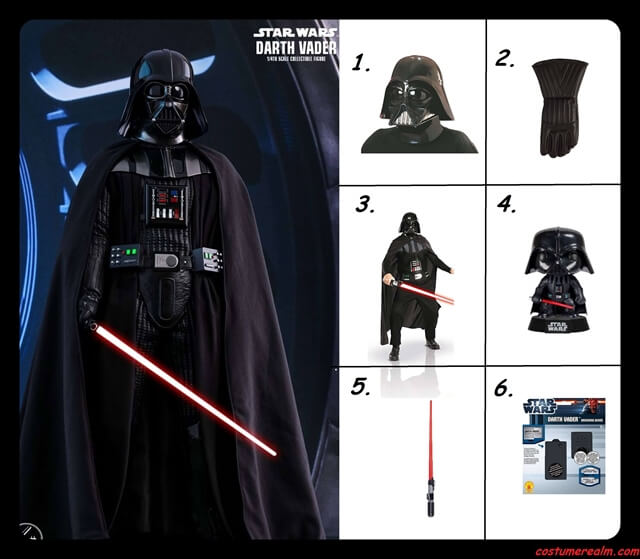 You need the following items for your Darth Vader Halloween costume:

How To Dress Like Darth Vader From Star Wars 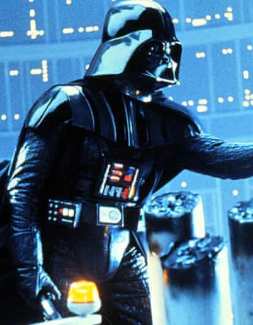 Darth Vader's Costume: Vader's breastplate appeared to be one piece that covered his entire torso. The durable steel material was gray in color with several black vertical stripes. Around the neck of the shoulder, the armor was a black chain, and connected to the upper seam of the armor was Vader's black, flowing, almost floor-length cloak made of armor material.

Darth Vader's Helmet: Just like traditional Sith armor and modeled on old Sith droids, Darth Vader's suit was both intimidating and terrifying. The front has been cut out to fit around his head and show his "face". This helmet had a raised ridge that ran between his eyes to the back of his head, where it merged with the durable steel, obsidian, and plastahl of the helmet itself. 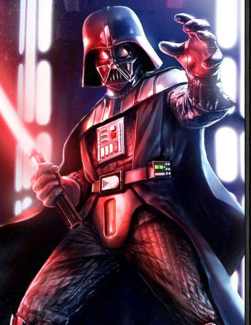 Darth Vader is one of the central characters in the Star Wars universe and appears as the central antagonist of the original trilogy.
He is the Sith Lord personality of the fallen Jedi Knight Anakin Skywalker after his turn to the dark side. He remains the central antagonist until the events of Return of the Jedi when he finally redeems himself to save his son Luke Skywalker from his master Darth Sidious and fulfill the prophecy as the chosen one.

After Anakin Skywalker finally accepted his inner darkness, the person of Anakin ceased to exist as the personality of Darth Vader almost completely overtook him. Unlike most members of the Sith Order, Vader can not only admit his mistakes but learn from them as well.

After his near-fatal fight with Obi-Wan Kenobi on Mustafar in 19 BBY, Darth Vader was given a mobile life support system made from a unique black armor during the war.

Darth Vader's armor, serial number: E-3778Q-1, was designed to preserve and protect the charred body of the young Sith apprentice while exuding an air of intimidation and control. His suit follows an ancient Sith tradition, in which the warriors of the dark side of the force adorned themselves with heavy armor. The suit's construction included Sith alchemy to increase Vader's severely diminished physical strength and vitality.

The suit offered a range of life support systems and gave Vader relative freedom of movement without having to use a levitation chair. It was damaged or broken several times during its use, necessitating upgrades and repairs. The suit was eventually irreparably broken in 4 ABY when Vader rescued the mighty lightning bolt of Emperor Palpatine from his face aboard the Death Star in an attempt to save his son Luke Skywalker from certain death. After Vader's death, Luke burned his father along with the armor on the forest moon Endor.

The armor completely enveloped Vader, creating a seal to protect his charred skin and lungs. It was also uncomfortable to wear. Vader slowly learned to live with the isolation and anonymity the suit placed on him. Vader had to change his lights, but his style, to balance the weight, bulk, and rigidity of his armor. The suit's electronics are sensitive to electrical discharge, although Vader added a limited amount of insulation to the suit after discovering this. To avoid the claustrophobic nature of the armor, Vader had several pressurized meditation chambers built where he could remove his mask and suit and still survive. Vader longed to be less dependent on his armor, and sometimes his armor, but he worked to make it work.

Despite the weaknesses the suit brought with it, it also offered a number of strengths. These include greatly improved durability and endurance, numerous sensory improvements, and protection against extremely inhospitable environments and biological weapons.