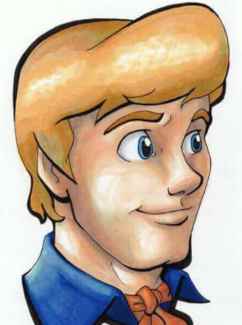 Fred is the leader of the Mystery Inc. gang and the driver of the van: The Mystery Machine. Fred is brave, he is the opposite of Shaggy.

Over the years Fred has built overly intricate traps for villains who often accidentally set Scooby-Doo and Shaggy just to catch the villain anyway. He also takes responsibility by dividing the group to look for clues. Fred usually takes Daphne Blake and Velma Dinkley with him, while Shaggy and Scooby go out alone, although he sometimes sends Velma along with Shaggy and Scooby; Fred's main catchphrase relates to this method of "divide-and-conquer" notes: "Let's split up gang ..." 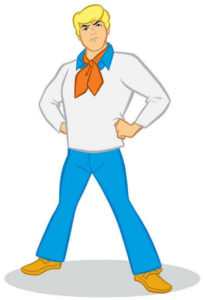 Fred is a good-looking Caucasian teenager with blonde hair. His original and current wardrobe consists of a white sweater over a blue shirt and also wears blue pants. His trademark accessory is his orange ascot.

When Scooby-Doo and Shaggy Rogers moved to Shaggleford Manor, he wore a light blue jacket over a white shirt, dark blue pants, and brown shoes.

In the early days of his Ascot, he was a level-headed and stoic leader for many years. Although he showed signs of a possible fear of arrest in his later years as a crime novel writer after believing he was the Red Skull.

His cowardice is still involved when Fred, Daphne, and Velma have to split up to find Shaggy and Scooby at a Scooby Snax factory in Ohio? "In this ghostly fact-" until he realized what he was saying and tried to cool himself off to behave. Another example of this was when Farmer P. came to them and offered them warm milk during the examination to calm their nerves, which Fred politely declined, but after Farmer P. told them the story of the devil's farmer, Fred changed his mind and asked, "I think I'm ready for that glass of warm milk." He is also portrayed as a little less intelligent, more absent-minded. After commenting on how tech-savvy Gary Snipper is, Daphne adds that he's good at doing things too.