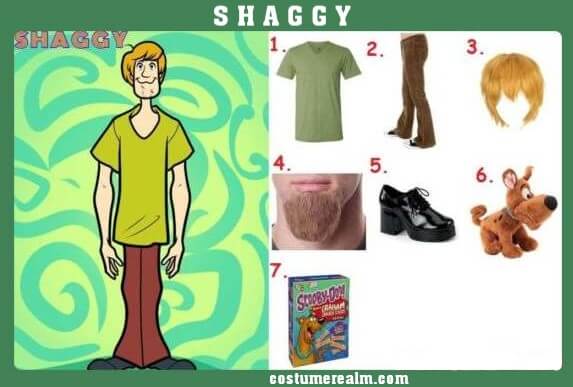 You need the following items for your Shaggy Halloween costume: 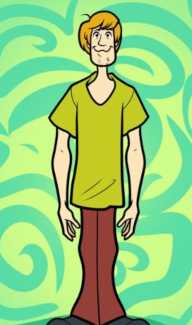 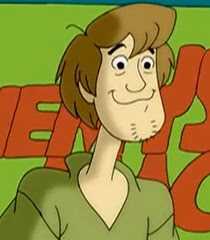 Shaggy Rogers is a member of Mystery Inc. and the owner and best friend of their team's mascot: Scooby-Doo, a talking Great Dane.
Shaggy is something of a hippie because of his generally laid-back personality, hair, clothing, and inappropriate use of the word "how" in his speech. Although he has tried to be the average teenager over the years, he is still branded as a hippie.

He and Scooby-Doo have almost insatiable appetites and a tendency towards nonsense and cowardice. Because of these similarities, Shaggy usually treats Scooby as a normal person rather than his pet. Shaggy uses his catchphrase "Zoinks!" when he is surprised or frightened, which is often the case. Most of the time when he's scared he would rather save himself and not help others, but sometimes he is encouraged by either Scooby Snacks or his personal shaggy snacks, or Scooby's disappointment with his attitude.

Shaggy is a lanky, Caucasian teenager; For his age, he is pretty light - even Velma Dinkley can pick him up with her own hands. He appears to have a very long neck. He also has whiskers on his chin that form something like a goatee. During his time as a werewolf, his iris is blue-green.

He usually wears a green V-neck shirt, brown flared pants and black platforms, a red V-neck shirt, and blue pants. He rarely changed his outfit, from simply changing the colors of his outfit with a t-shirt and blue pants to a complete wardrobe change in Albert Shaggleford's mansion with a white t-shirt with dark green stripes and sleeves, an orange long sleeve an undershirt, light green cargo pants, and black and white sneakers.

Although usually viewed as a coward, Shaggy often proves useful in tracking down the "monsters" and "ghosts" that are usually at the center of the gang's secrets, sometimes accidentally and sometimes by reluctantly acting as "live bait" for a trap acts as a necessary distraction for their eventual capture. Shaggy also has clothes, ventriloquism, and is athletic, which the gang often helps; In the episode What a Night for a Knight, Daphne says he's the best gymnast in school, and he also mentioned that he ran a distance.