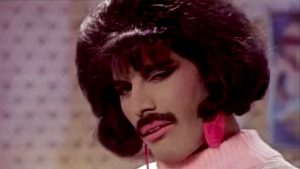 I Want To Break Free Costume US 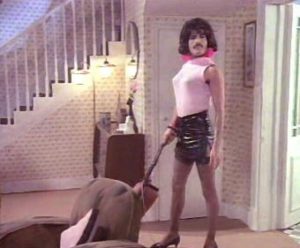 "I want to break Free" is a song by British rock group Queen, written by her bass guitar player John Deacon.

It appears in the album The Works (1984) and has been released in three versions: Album, Single and Extended. It has been included in most of the group's live concerts, in several videos, and in The Freddie Mercury Tribute Concert, where it was sung by Lisa Stansfield.
The song is best known for its music video, for which all band members wore women's clothing, a concept by Roger Taylor that parodied the longtime ITV soap opera Coronation Street.

The second a part of the video enclosed a composition rehearsed and performed with the Royal Ballet and choreographed by Wayne Eagling.

While the parody was celebrated in the UK, where cross-dressing is a popular trump card in British comedy, it has been regarded as controversial in the United States.
After its release in 1984, the song was well received in Europe and South America and is considered the anthem of the fight against oppression. The single reached only number 45 on the US Billboard Hot 100, but reached number three in the UK and was certified with over 200,000 copies sold in silver.

It additionally topped the charts of Republic of Austria, Kingdom of Belgium and also The Netherlands.

The song is included on the band's compilation album, Greatest Hits II.