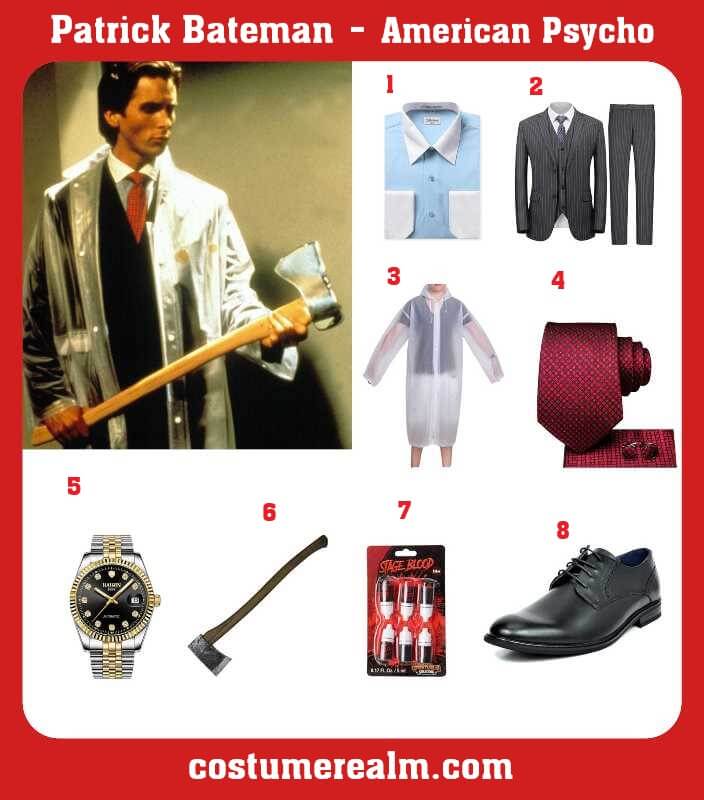 You need the following items for your Patrick Bateman Halloween costume:

Patrick Bateman is a rich banker in New York. As he explores his violent, hedonistic fantasies, he hides his alternate psychopathic ego from his co-workers and friends.

Get the look of Patrick Bateman by dressing up in a light blue and white 2 toned dress shirt, a black pinstripe dress suit, a red necktie and black oxford shoes.

Dressing up as a psycho serial killer is always fun at Halloween, but if you have some bold friends that you want to share the fun, get them to dress as other serial killer characters such as Jeffrey Dahmer, The Grabber, Rick Deckard, The Riddler, Leatherface, Michael Myers, Dexter Morgan, Mr. Jingles, Sweeney Todd, and Hannibal Lecter.

Patrick Bateman Costume: Bateman is a wealthy banker, and like most bankers, he dresses impeccably, If you don't already have a pinstriped dress suit, check online, as classic fit pinstripe dress suits are hard to find at retail stores nowadays. You should also get the dress shirt online for the same reason. It is not so wise to wonder around holding a real axe even at Halloween, just go to the closest costume shop to get the axe alongside some stage blood.

He is a racist, misogynistic, torturous, homophobic, and anti-Semitic, but he feigns concern for equality and "traditional moral values" for the sake of his public image of modernity, or simply out of the misguided notion that this would render him more agreeable. His peers ridicule him behind his back, Evelyn is cheating on him, his own lawyer calls him a “bloody ass-kisser” and people outside of his social circle call him "yuppie trash".

He has nothing approaching feelings for anyone else in his life, except for his secretary, Jean, who he knows is in love with him and who he passively accepts that he will probably marry one day. Even then, however, it is made clear that he sees her not as a person, but more as a beautiful object that should not be destroyed. He talks to her throughout the novel and neglects her feelings for him.