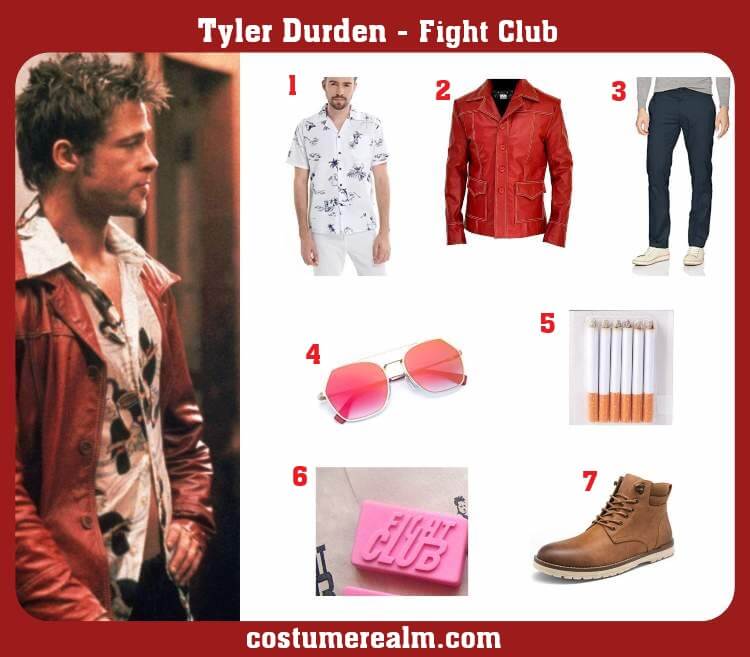 You need the following items for your Tyler Durden from Fight Club costume:

How To Dress Like Tyler Durden From Fight Club 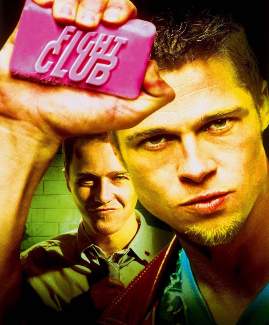 Tyler Durden Shirt: A not-so-fancy Hawaiin style black & white short sleeve shirt is what you need to start with your Tyler Durden costume.

Tyler Durden Sunglasses: Another one of Tyler's must-have costume items is his pinkish-red retro sunglasses. 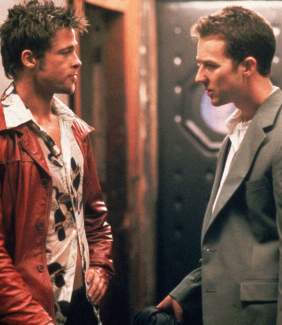 Tyler is the narrator's imaginary friend. Tyler shows up when the narrator realizes he needs to change his life but feels like he can't do it on his own. As a result, his troubled mind produces Tyler as his alter ego. Tyler manifests himself as physically attractive and extremely charming.

The narrator first "meets" Tyler on a plane when the narrator returns home from a business trip. Tyler reveals that he runs a soap factory in his basement using stolen fat from a liposuction clinic. Tyler gives the narrator his card before leaving, and when the narrator comes home, he finds that his apartment has exploded. He had unwittingly done this himself when he "became" Tyler. As Tyler, he had two night jobs: one as a movie projector, where he inserted pornography into family films, and one as a waiter, where he manipulated customer orders.

Later, the narrator calls Tyler and they meet at a bar called Lou's Tavern, where they agree to live together in Tyler's rundown house on Paper Street, which was rented on the narrator's behalf. In the parking lot, they begin to fight each other for no other reason than for fun, with Tyler believing this is the first step in defending yourself against the rules of society in general. Their struggles attract the attention of many passers-by who begin to join in, which eventually leads Tyler to start a fighting club in the basement of Lou's Tavern. The Fight Club becomes a huge hit, and as its members grow rapidly, Tyler begins to secretly use it as a platform for his ideas. The narrator soon sees the club evolve into Project Mayhem, a terrorist group designed to destroy everything Tyler believed was wrong in society.

The narrator soon realizes the true nature of Tyler and eventually discovers that he is just an invention of his own imagination. While trying to undo Tyler's actions, Tyler severely beats him before handcuffing him to a chair and threatening him with a gun. However, the narrator realizes that if the gun is in Tyler's hand, it must actually be in his own hand. Then he keeps shooting himself in the mouth but imagines shooting himself in the head. As a result, a large gunshot wound immediately appears in Tyler's head and is supposed to put an immediate end to his existence.