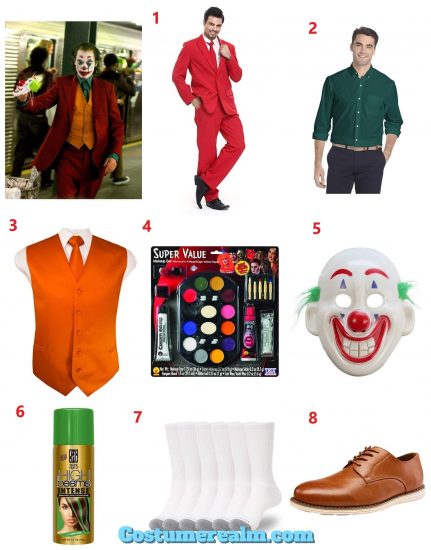 You need the following items for 2019 Joker Halloween costume

Have no time to DIY? Get the Full Joker 2019 Costume

2019 Joker Costume: In the 2019 Joker movie, we see Joker (Joaquin Phoenix) in a red suit with an orange suit vest and dark green shirt. You can either get separate items or just get a full 2019 Joker costume.

2019 Joker Mask: We are used to seeing Joker in scary clown masks but this time Joker prefers funny+scarry one. It is quite different from other Joker masks however, key features remain similar.

A mentally ill, poor stand-up comedian who is ignored by the society, whose lack of success has made him a nihilist criminal. Before the cast of Phoenix, Leonardo DiCaprio was considered. Phoenix was interested in a low-budget "character work" of the comic book character, and he felt that the film "was unique, somehow its own world, and perhaps [...] that scares you the most." and his laughter was based on "videos of people suffering from pathological laughter".

He also tried to portray a character that audiences could not identify and did not look at previous Joker players for inspiration; instead, he read a book about political assassinations so that he could understand the murderers and their motivations.