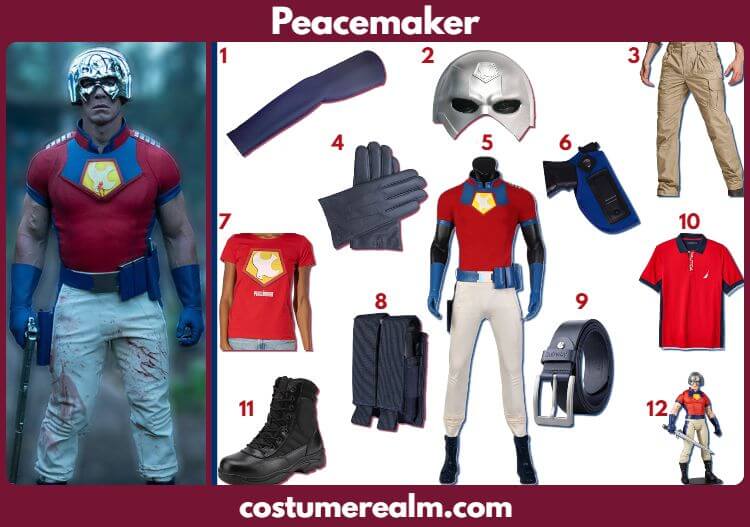 You need the following items for your Peacemaker costume: 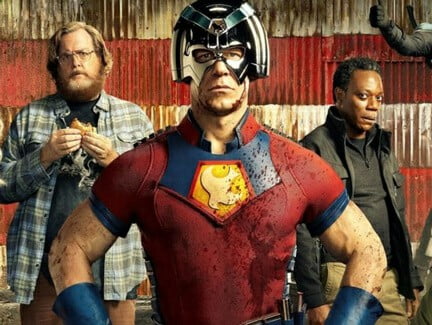 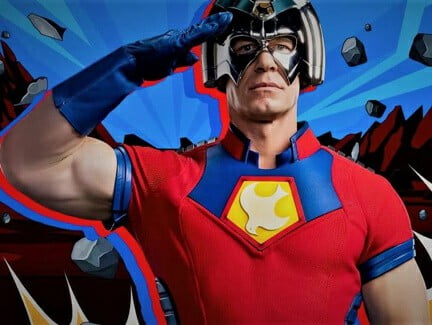 The costume includes the Peacemaker's signature mask, as well as a shirt, a pair of gloves, and a belt, giving you everything you need to look like The Suicide Squad. According to the comic books, Peacemaker’s helmet was loaded with all kinds of weapons including an RDX bomb with a hidden fuse and a laser-ray in the forehead area, an ultrasonic beam to stun his foes, voice duplication equipment, an underwater mode, and a pocket radar.

The shiny metallic finish, the semi-circular beam that goes all around the superhero’s head, the pointy ends under the eyes, and the distinctive spot on the forehead, presumably for that badass laser ray.

Christopher Smith is a man who believes in peace at any cost, no matter how many people he has to kill in the process. He is more than willing to fight, kill, and even start a war, but in the end, everything he undertakes is in the name of keeping the peace. While Smith is obsessed with attaining everlasting peace and freedom, his actions are violent and he loves death and destruction, stating that there is "nothing like a bloodbath to start the day". He is willing to do anything to gain peace and stop all fighting, no matter how many people he has to kill, injure, maim, or emotionally destroy in the process, making him very hypocritical.

However, he is not beyond warning people he appreciates about an attack. He is also willing to humble himself for his cause, blindly following orders and condemning Bloodsport for killing for money. Self-righteous, egotistical, arrogant, and overconfident as demonstrated by his rival Bloodsport, he is not ashamed to show what he is capable of. Due to his selfishness and hypocrisy, the other Suicide Squad members tend to dislike him and don't take him seriously, not that he cares as he thinks he's better than them and claims to do exactly what Bloodsport does," but better.

Ratcatcher 2 and King Shark were the only two Suicide Squad members who attempted to reach him, and while he initially had a good relationship with the former, he regrettably attempted to kill them in order to get the secrets to finding out about Project Experiencing Starfish before he went public to make a difference, to see a different side of him and become very scared of him. He was also upset at King Shark's childish and stupid ways of showing his kind gestures he resisted a cursory encouragement and Smith as much as millennials disliked like Ratcatcher 2.

Christopher is very close to his older brother Keith, growing up he developed his love for music while growing up with Keith. Chris' accidental killing of Keith left him severely traumatized and a major contributor to his distorted view of morality and low self-esteem. Chris shows signs of post-traumatic stress disorder, recalls Keith's death frequently, and struggles to keep his composure when the flashbacks happen. His killing of Rick Flag also later triggered similar flashbacks, then after killing his own father, Chris began hallucinating him. As an adult, Smith continues to love music and often listens to music to calm down and reflect on himself.

Behind all the selfish, dutiful, and self-righteous behavior, Smith is a broken, self-hating man who tries to make sense of the world but is too haunted by the horrific acts he has committed to adjusting to a normal environment. Smith's time with the Street Kids allowed him to slowly come to terms with his former demons and to reconsider his worldviews, to show his vulnerable side to others more often, and to learn to process his suppressed emotions, but also to become more emotionally unstable and vulnerable to outbursts of anger. When White Dragon tried to kill Peacemaker, Chris finally snapped after all those years of abuse and horrific treatment and lashed out at his father, and eventually.

He chose to kill his own father, when he did, Chris broke down crying and fully acknowledged all his terrible deeds in the past.