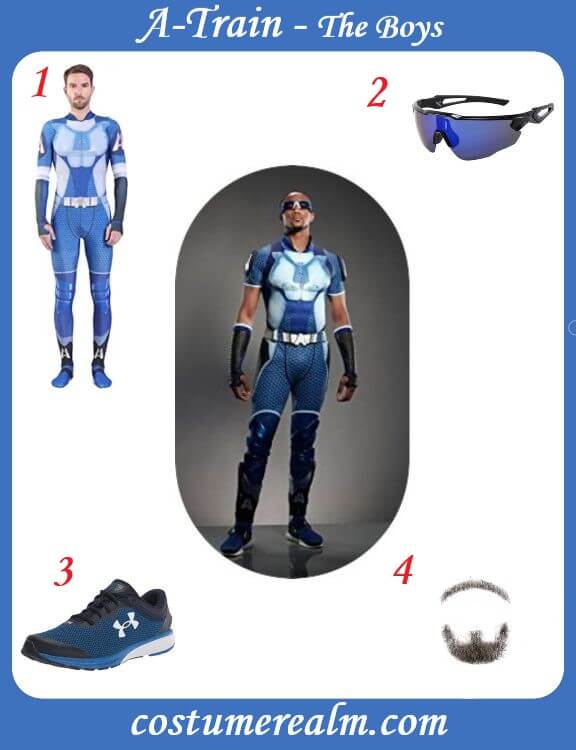 You need the following items for your A-Train Halloween costume: 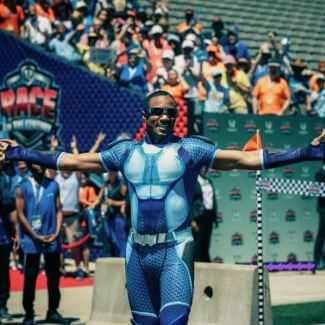 To dress up as A-Train, one of the main characters of The Boys, you need blue sunglasses, an elastic A-Train costume, a fake beard and mustache, and a pair of blue sneakers. You'll feel pretty cool in this costume. 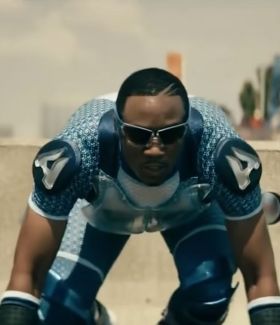 He is a speedster who was formerly part of the team called Teenage Kix and is a recurring member of The Seven and Hughie Campbell's nemesis. He accidentally killed Hughie Campbell's girlfriend, Robin Ward, with his powers while high on Compound V, the event that ultimately led to Hughie joining The Boys.

A-Train was fired from The Seven but has since been asked to rejoin and is currently the "Fastest Man Alive". Beneath the carefree exterior of a famous superhero lies the soul of a mortal athlete deeply unsure if he wants to stay on top. He will do whatever it takes to stay in The Seven because he knows it's only a matter of time before a younger, faster challenger takes his place and that's a problem even the world's fastest man can't escape can.

A-Train is a complex individual with many inner struggles. Initially, like most "heroes", A-Train is self-centered and primarily interested in fame, fortune, and publicity rather than helping others. In fact, he displays a remarkable lack of empathy, possibly even to the point of sociopathy.

In his first appearance, he proved to be extremely carefree; He kills Robin Ward by walking through them, albeit accidentally. Additionally, there are hints throughout the series that he has caused this type of incident before. Not only did he show no remorse for what would become a traumatic accident, but he also showed incredible callousness when he later joked about the incident with another "Super" and laughed at Robin's death. Although he personally apologizes to Hughie for killing Robin, he only did so because he was forced to do so by Vought as a concession for Hughie Campbell, who would not sign Vought's non-disclosure agreement unless A-Train apologized. A-Train's indifference to the incident is underscored by the fact that he is unable to recognize Hughie, even after being shown a photograph of himself or when encountering Hughie outside of Popclaw's apartment.

The only person A-Train seems to care about is his girlfriend, Popclaw; However, their relationship is strained as A-Train is more focused on his career as a member of The Seven and retaining his title as the Fastest Man Alive. Also, Popclaw is frustrated by A-Train's repeated refusal to publicly acknowledge their relationship, instead pretending to be unattached and available. Things take a turn for the worse when she is blackmailed into revealing information about Compound V and A-Train is "forced" to kill her to ensure the security of his position on The Seven. While A-Train feels some kind of remorse over her death, A-Train eventually blames Hughie for "forcing" him into that position.

A-Train is determined to maintain its status as the world's fastest man. As a result, he uses the drug Compound V to further enhance his powers. This leads to his downfall as he later suffers from a heart attack which is ultimately the reason he was kicked out of The Seven. However, the fact that Compound V is used constantly, despite his arrogant and confident demeanor, shows A-Train's insecurity and lack of confidence. The day before his race against Shockwave, he revealed to Popclaw his fear of losing and being outclassed by his rival, with the stress of having to win the race to stay in The Seven. Another sign of his insecurity is the fact that he needs public approval more than anything and cares more about his public image than his health. After quickly recovering from his leg wound inflicted by The Female, A-Train began toning his body with physical training as he needed to return as soon as possible in order not to damage his public image and jeopardize his reputation.

After the repercussions of his actions and Compound V's abuse began to seriously cost him, A-Train was shown to have changed for the better as he now endured humiliating experiences from his substance abuse that has now resulted in his place at The Seven being in danger. As seen when he was forced to film a humiliating scene in the New The Seven Movie to manipulate the public backlash of his scandal so as not to cause problems for Vought. He also showed great dismay at the death of his rival Shockwave, showing that he did not hate his fellow speedster.