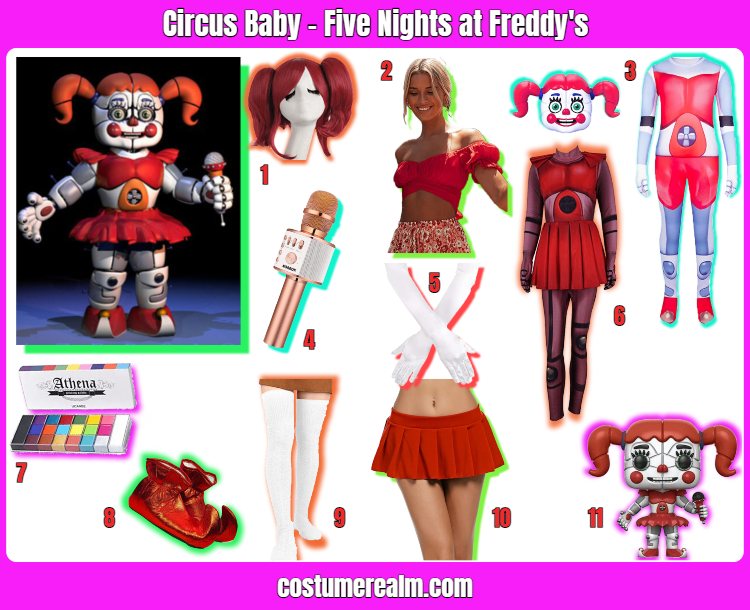 You need the following items for your Circus Baby Costume Halloween:

Other From Five Nights at Freddy’s Costume Ideas

How To Dress Like Circus Baby From Five Nights at Freddy's 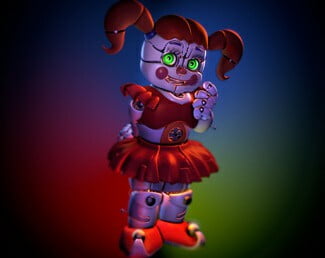 Dress like Circus Baby From Five Nights at Freddy's; 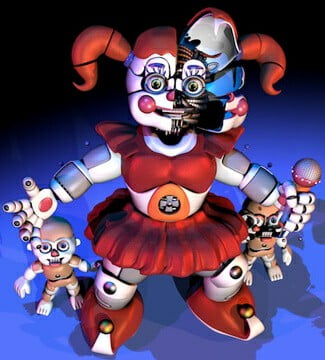 Circus Baby is a female animatronic whose overall appearance is reminiscent of a clown. The baby has auburn hair in high pigtails on either side of the head held up by blue hair ties. The baby has light green eyes, long blue eyelashes, and short blue eyebrows.

Her mouth is open in a wide smile, revealing small, flat endoskeletal teeth framed by thin, red lips. Her cheeks are large, round, and red, and her square nose is red and slightly upturned and pointed. Her midsection is exposed, revealing a metal fan surrounded by an orange triangle with rounded tips.

The tips of her fingers, which appear to have ball joints, have been unsealed to reveal shiny silver underneath, similar to the spring-lock suits. Their knees have round, shiny, silver caps and what appear to be blue needles protruding from parts of their limbs. She wears a red crop top with ruffles at the shoulders and a matching red ruffle skirt.

The toes of her matching red shoes are pointed and curled, white below and gleaming balls of gold (possibly bells) on top; these are the shoes a fool wears. Under her skirt she wears red and orange striped panties; which can only be seen by the error of one of their images in the game file. In her left hand, she holds an orange microphone with red accents.

Circus Baby is an elaborate, tragic, yet sinister animatronic. The Baby mini-game reveals that Baby killed William Afton's daughter Elizabeth because Baby and the other Fun Time animatronics were built to murder children. However, Elizabeth's spirit then began possessing Baby and it is implied that she forgot who she was and believed that she really was Circus Baby.

Circus Baby mostly speaks in a soft, calm voice that almost never goes beyond a whisper. She speaks very brightly about children and claims to have enjoyed entertaining them and making them happy, but she seems very distraught, confused, and saddened by their situation and hates being trapped in the rental facility, and even is deeply traumatized and haunted by her mystery and dark past.

She also often talks about childish things that have little to do with the current situation, such as ice cream, birthday cakes, role-playing games, and other children, showing that she has retained the childlike mentality that she had as a human; This is particularly evident in Night 4 where she compares the ice cream scoop to a real ice cream scoop used at birthday parties.

However, Circus Baby soon turns out to be just like her twisted "dad" William. She is manipulative and cunning as she runs almost all events in Sister Location and even acts theatrically saying that one of her tactics is to pretend and do to get what she wants and to manipulate people.

She has also been shown to be highly abusive towards her only friends, as it has been implied that she either manipulatively or directly coerced the other animatronics into participating in her diabolical plan to fuse their parts to create an animatronic fusion and a hive mind to manage as Ennard must manage to escape from the facility.

Even after achieving her goals, she still proved to be a control freak, for while she was a part of Ennard, she apparently forced the other animatronics within the amalgam to accept her as their leader and unfairly control them, which ultimately was led to them being tricked into betraying her and being thrown out by Ennard.