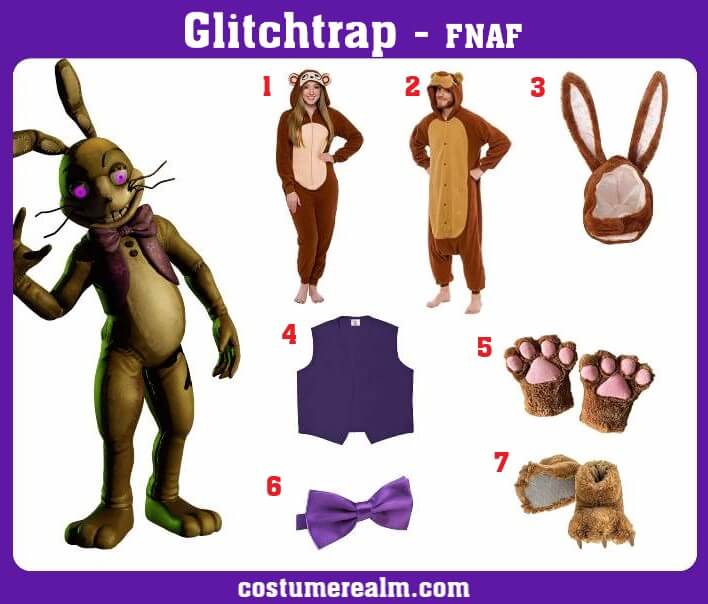 You need the following items for your Glitchtrap Halloween costume: 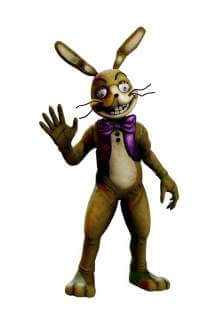 Glitchtrap Costume: Glitchtrap is mainly a golden yellow color with lighter accents on the ears, torso, and muzzle. His face is egg-shaped with light purple eyes, short eyelashes, and long, thin eyebrows. He has two black whiskers on either side of his snout and a large, grinning mouth with cream-colored teeth and two larger ones on top. He has a deep purple bow tie and a matching vest with star spots. He has two dark buttons under his bow tie. In the main lobby, it glows an eerie green 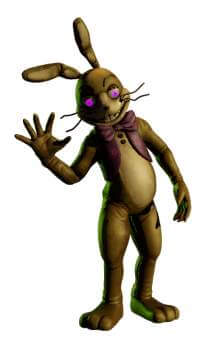 Glitchtrap is shaped like a man wearing a Spring Bonnie costume - a grinning, two-legged rabbit of golden yellow color. He is wearing a purple vest with asterisks and a purple bow tie with two buttons on his chest. He also has stitches that extend across his waving hand. It appears translucent at first and evolves into a less spectral form over time.

He also has pale purple eyes with tiny pupils that are the first to be seen when he appears to the player's right. In black light mode, his eyes turn blue with white, circular pupils. He also has large whiskers on each side of his face, three eyelashes on both eyes, and large raised eyebrows.

While Glitchtrap's personality is unknown and quite mysterious, he is almost completely silent as his only voice is "I always come back" from the Princess Quest mini-game, which means that he has the same personality as his human form. Because of Glitchtrap's role on the show as William Afton, he seems to keep who he was as a person: vicious, evil, cruel, sadistic and arrogant. He seems to be able to maintain his high intelligence, such as manipulating and brainwashing people like he did with a woman named Vanny, to get what he wants. As can be seen from the conversation with Vanny, Glitchtrap still wants to scare his victims and allies while talking to her in threatening ways. Glitchtrap seems to mock it, mocking the player by waving them and staring at them to make them feel uncomfortable and scared like they do as the Springtrap in Five Nights at Freddy's 3.