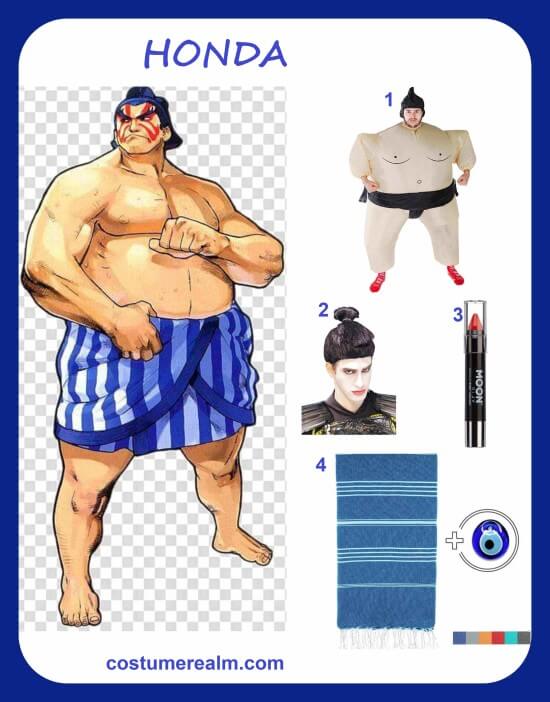 You need the following items for your Honda from Street Fighter Halloween costume: 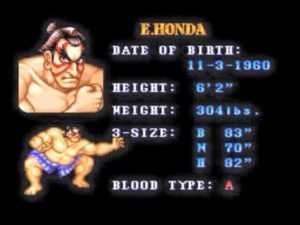 Honda Costume: Honda wears a traditional mawashi worn by sumos in sumo wrestling; the color of his mawashi is sky blue. His loincloth has a white mountain pattern and white clouds in the middle with a gold border around the edge.

Honda Wig: Honda has black hair that he wears in a chonmage style. 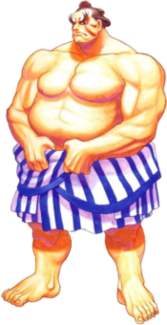 Edmond Honda, better known as E. Honda, is a video game character from the Street Fighter series that is first seen in Street Fighter II. He is an honorable sumo wrestler who values tradition.

Edmond Honda is a very heavy but very muscular Japanese man, apparently in his late 30s to early 40s. While Honda is not the same size as Sagat or Zangief, he is quite tall, although that doesn't seem to be due to his crouched fighting stance. He has black hair in a chonmage hairstyle and only wears a white and light blue mawashi with a striking red fundoshi underneath. His face is painted in the Kumadori style with red makeup that is used in Kabuki. As a sumo wrestler, he always fights barefoot, although some works of art show him wearing a pair of geta. His classic appearance is his "Nostalgia" costume in Street Fighter V.

In Street Fighter V, Edmond wears a traditional mawashi worn by sumos in sumo wrestling; The color of Waden Mawashi is sky blue. His loincloth has a white mountain pattern along with white clouds in the center with a gold border around the edge, and he wears individual foot wraps on his right foot and arm wraps on his left arm.

His story costume is semi-casual; a white formal suit jacket with a purple and gold buttoned shirt underneath, white formal pants, and black dress shoes.

E. Honda is an honorable and kind man who gives a warm welcome to those he deems good. He's also everything when it comes to showing the world the strength of sumo, and for that, he always goes all out during his training and fighting programs. He also enjoys hot steam baths between workouts, his favorite spot is Kapukon Yu.

Despite its apparent lack of agility and portrayal in other media as clumsy or silly, Honda is a very powerful sumo grandmaster. He takes both his sumo art and his title "Ōzeki" very seriously and regards it as a sacred martial art like any other; Honda often tosses a handful of salt before starting a fight.

In Street Fighter V, E. Honda has a strong personality as the owner of his own bathhouse but has been careful about giving his guests the right manners.