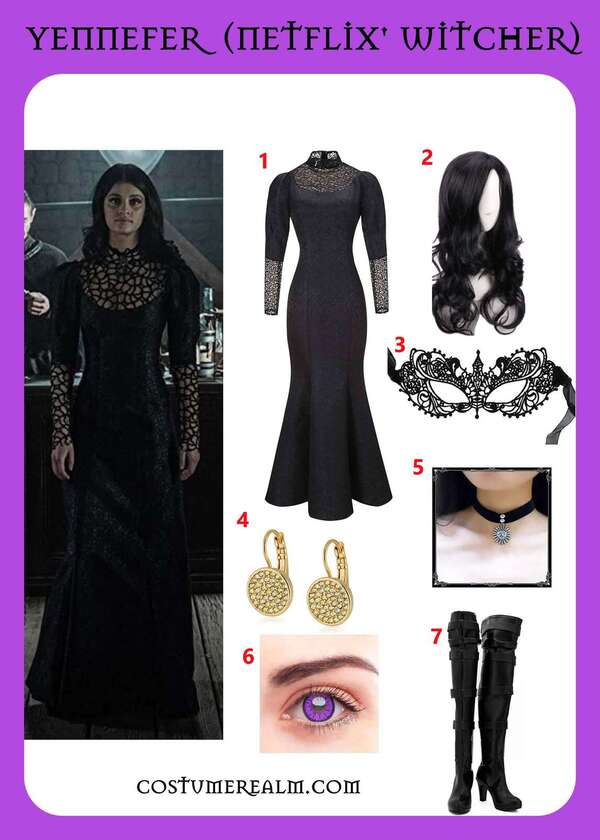 You Need The Following Items For Yennefer Cosplay Costume:

*Visitors in the UK can get Yennefer Costume Items here 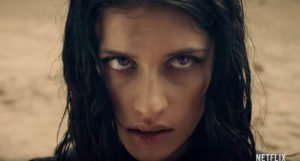 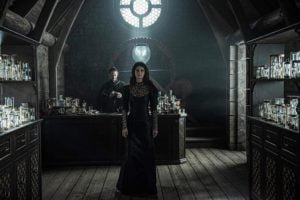 Yennefer was a sorceress from Vengerberg, the capital of Aedirn, before he was recruited by Tissaia de Vries and brought to Aretuza to study magic. More than 30 years after her ascension, she met Geralt from Rivia, for whom she had mixed feelings due to the circumstances in which they met.

In her hometown of Vengerberg, Yennefer, a young woman with a hump and disfigured jaw, tries to give a flower back to two lustful lovers in front of a barn. Disgusted by their looks, they attack Yennefer, hold her on the ground and hurl insults at her until she instinctively travels to Aretuza. There she meets Istredd, a young wizard who tells her that she has been marked. Then he creates an incomprehensible portal to send Yennefer home.

Yennefer finds a sorceress named Tissaia de Vries, who was portrayed by Aretuza, and buys her from her father for four marks, less than half the price of a pig. Yennefer's mother disagrees, though there is no answer, as does Yennefer's cry for help. Yennefer is violently kidnapped from her home in Vengerberg and locked up in a room in Aretuza. She looks at herself in the mirror, disgusted by what she looks back on, smashes the mirror and reaches for a broken glass as she thinks about taking her own life.

Although Yennefer slit her wrists, she survives the night after unsuccessful suicide attempts due to Tiassai's intervention. Yennefer wished she had died and at least had control over it. Tiassai replies that Yennefer has not taken control, she has lost it.

Yennefer then enters the greenhouse, where she is among several other young women who, like themselves, can do magic. Tiassai explains the dangers of magic and how each of them showed the ability to control them and lead chaos, although magic itself is the control of chaos. She collected them for an exam; In front of each of them there is a flower and a stone with which they should lift the stone without touching it. Fringilla is the first initiate to lift the stone, but as shown, magic has its price. Just seconds after Fringilla picked up the stone, her hand ages and shrinks quickly.

There is give and take with magic, as Tiassai shows by lifting the stone, but with the flowers in hand, to show what is taken when the flowers grow old and die. The rest of the initiates follow their lead, with the exception of Yennefer, who cannot move the stone in any way. Discouraged by her failed attempt, Yennefer flees the greenhouse. She visits Istredd and introduces herself.

A few weeks have passed since Yennefer's arrival in Aretuza. The initiates sit opposite each other during an exercise to determine their partner's greatest fear. However, telepathy is said to have occurred after Yennefer had analyzed her partner Anica for hours and failed to recognize her fear and lies in order to cover up her shortcomings.

Tiassai calls Yennefer for her lie and insults her in front of the class. Therefore Yennefer withdraws to Istredd and describes their shortcomings. He advises her to keep trying and says that he has not given up and can now read minds. He even helps Yennefer read his thoughts and gives insights into cicadas, warm bread and other things that she might enjoy.

The initiates are later brought to Tor Lara to fill lightning bolts into bottles. Tor Lara is the most powerful place on the continent and closed to everyone except the Brotherhood of Wizards. This latest study is designed to test their ability to control the ultimate expression of chaos, and Yennefer is the next. She lifts her bottle and fails, the lightning hits her and sends her across the room.