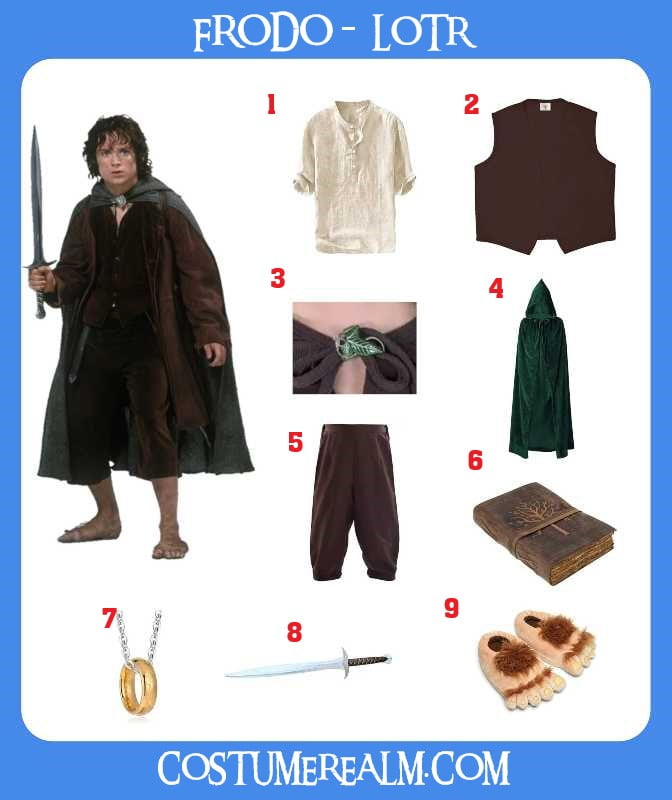 You need the following items for your Frodo from LOTR Halloween costume:

Cosplay Frodo by dressing up in a linen shirt, brown vest, an elven brooch, green hooded cloak, the one ring, and a foam sword.

Hobbits are known to be a social race, a lonely Hobbit is not a great idea for cosplaying. Get your friends or family members together to for a LOTR group cosplay. Along with Frodo, your friends can dress up as Arwen, Gimli, Aragorn, Legolas, Bilbo, Gandalf, Galadriel and Gollum. 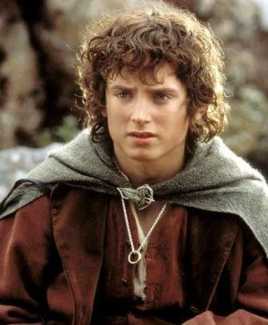 Frodo Costume: You can find most of the required items for Frodo Halloween costume at a retail store or a costume shop such as a linen shirt, a medieval brown vest, green hooded cloak, the one ring and medieval knicker pants. Look online for Frodo's elven brooch and Frodo's sword.

Frodo was a hobbit of Shire who had lived a happy life in there until he inherited the one ring from his uncle, Bilbo Baggins. After getting the ring, he started his quest to the elven land of Rivendell, thinking that would be all, however when he was at Rivendell his real quest started to Mount Doom.

Like other hobbits, he was a shy young hobbit with bushy, curly brown hair, and had a lighter complexion than usual, having come from Fallohide through his Brandybuck mother. Frodo is described as mid thirty, despite being fifty years old under the influence of the Ring. Bilbo and Frodo shared a joint birthday on September 22, although Bilbo was 78 years older than Frodo. At the opening of the Fellowship of the Ring, Frodo and Bilbo were celebrating their thirty-third and one hundred and eleventh (111th) birthdays, respectively. Frodo, like Bilbo, was considered a bit odd by many Hobbits. His fascination with the outside world, his fascination with Elves and faraway places, didn't fit with the general content persona of most Hobbits. This curiosity has also been attributed to his Took lineage. He was very kind and caring, taking pity on Gollum and, despite his distrust of the creature, allowed Gollum to take him and Sam to Mordor. This act of kindness later proved to be a factor in the mission's success in destroying the Ring. The influence of the ring and the wound of the Morgul blade seem to have given him the ability to see the spirit world, for example, he dreams of distant events several times. He can also see the ring of power that Galadriel is wearing and sense danger.

When Frodo left the Shire he was dressed in the typical Hobbit fashion: knee-breeches, shirt, waistcoat, jacket and cloak. Colors such as green and yellow were typical of the people of the Shire. He was unarmed except for a pocketknife.

When his small group was thwarted by the Barrow-wights, he lost his summer clothes and was wearing a funeral shirt when he was rescued by Tom Bombadil. When the herd ponies returned, they had to wear heavier woolen clothing for the colder weather. The hobbits found several long Dúnedain daggers in wight's treasury. These served as short swords for the Hobbits, but Frodo's sword was broken when he resisted the Witch-king at Weathertop. When the Hobbit found new Elven clothes that fit Imladris perfectly, he took off his clothes. Therefore, in the early stages of his quest, he donned a green silk tunic, trousers, and fur cloak, and hurled it into Mordor to wear his tunic and breeches in warmer weather. Later, his uncle Bilbo gave him both Sting, a magic Elven dagger, and a layer of mithril chainmail. The armor saved his life twice, the first when he deflected a spearhead in the Mines of Moria, and the second when he turned the dagger that Saruman was trying to kill him with.

Like other members of the Fellowship of the Ring, Frodo received a special cloak from Galadriel in Lórien that allowed him to adapt to the natural environment. After being betrayed by Gollum and captured by the Orcs at Cirith Ungol, Frodo lost all his clothes and most of his possessions. However, Sam Gamgee saved Sting. After the two orc tribes slaughtered each other in the tower of Cirith Ungol, Frodo donned Orc robes. This successfully deceived the Mordor-Orcs they encountered, but dropped the Orc armor and helmet as Sam and himself approached Mount Doom.