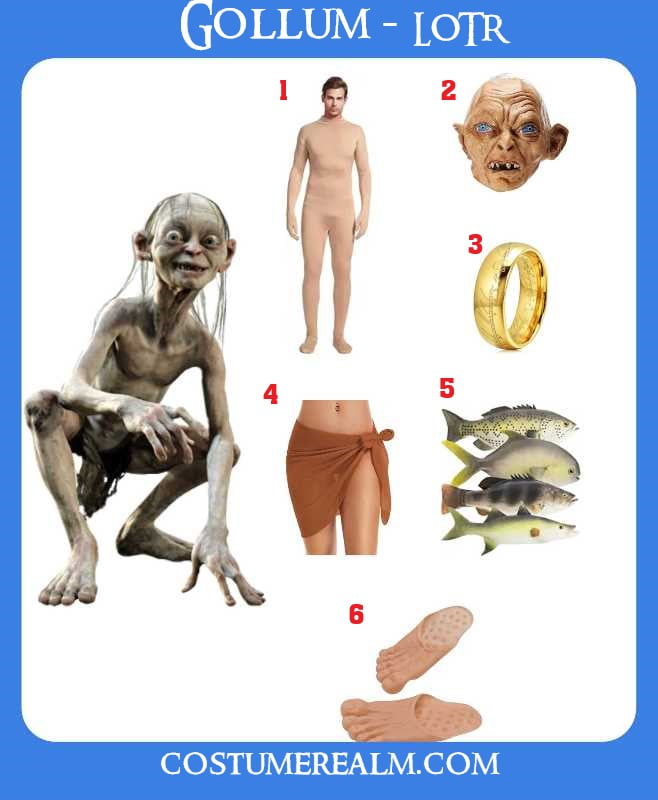 You need the following items for your Gollum Halloween costume:

Gollum is a hobbit at the age of around 500. He is obsessed with the one ring, calling it “my precious”. His unnatural long life was a gift (or curse) of the one ring, and his death was also caused by the ring.

Cosplay Gollum by getting a Gollum mask and the one ring which you can find at a local costume store, head to a retail store for the bodysuit and a swimsuit cover up.

For the last 500 years, Gollum hid in distinct places to stay away from, to keep the one ring safe.  If you don't have to keep your precious away from jealous eyes, you can get your friends or family members together for a LOTR group cosplay. Along with Gollum your group can dress up as Arwen, Gimli, Aragorn, Legolas, Bilbo, Gandalf, Galadriel and Frodo. 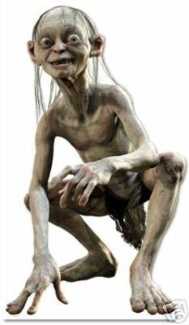 Gollum Costume: Lord of the Rings is a huge universe with great characters to cosplay. Gollum may not be the most favorite LOTR character to cosplay, but it sure is the funniest. For your Gollum Halloween costume, you will need a nude bodysuit, a Gollum mask, the one ring, and optionally a fake fish will be a great add to your Gollum look.

Gollum is a former hobbit, having the name Smeagol.  Possessing the one ring gave him an abnormally long life, but his look also changed from a hobbit to a froggy creature. Gollum was very thin, and he had only a few teeth. One of the orcs describes him as "more like a spider itself, or perhaps a starved frog." Gollum doesn't like the light and avoids it whenever possible. He is emaciated and emaciated, but has an evil, sinewy strength; Aragorn claims: "His malice gives him a strength that is hard to imagine." In The Two Towers, Gollum's grip is described as "soft but terribly strong" when Gollum fights Samwise. He is also able to effortlessly descend directly over rocks that Sam and Frodo would not be able to climb, and can make long jumps. In addition, he can run very fast, oddly enough, on all fours. Gollum prefers to eat meat raw and refuses to eat anything elvish because it apparently burns him to the touch. Also, in Jackson's description, Gollum seems neutral, unrelated to Sauron.

Gollum was an extremely depraved hobbit who fell under the control of the Ring as soon as he saw it. While other Hobbits, such as Frodo or Bilbo, encountered the ring, they were able to at least reflect its full effect, while Gollum completely succumbed to it, mercilessly killing his cousin Digol when he discovered it during Smeagol's birthday. Gollum almost immediately surrendered to Sauron's tortures after he was captured, although in his defense it can be said that Sauron was very capable and ready to use extreme cruelty.

Although he rarely calls himself by his real name Smeagol, Gollum possesses fragments of his former personality that sometimes surface. An obvious character trait would be his love of riddles, and when he meets Bilbo under the Goblin City, he enters into a game with him, which will either end with Gollum showing him the way out, or he will eat the Hobbit. Gollum seemed to enjoy fishing with his cousin Digol, and after his transformation, he was seen singing while fishing. However, this may be a mere coincidence. He showed himself to be a skilled survivalist, able to avoid meeting Shelob (which few people manage to do) and even make a deal with her to bring food to the spider, for which he received his nickname Shelob's Sneak. He has no qualms about cannibalism, probably because he forgot or rejected his Hobbit ethnicity, so he would eat Bilbo Baggins quite calmly if he lost their riddle game.

Despite his dissociative nature, Gollum was also capable of being smart and cunning, especially when it came to using deception and lies. He was able to conclude that Bilbo stole the Only Ring when he asked the riddle "what do I have in my pocket?" during their game and mastering the knowledge of Middle-earth, such as the knowledge of the passage to Mordor and the ability to live unnoticed under the Goblin City, survival from any tired goblin will fall to him.