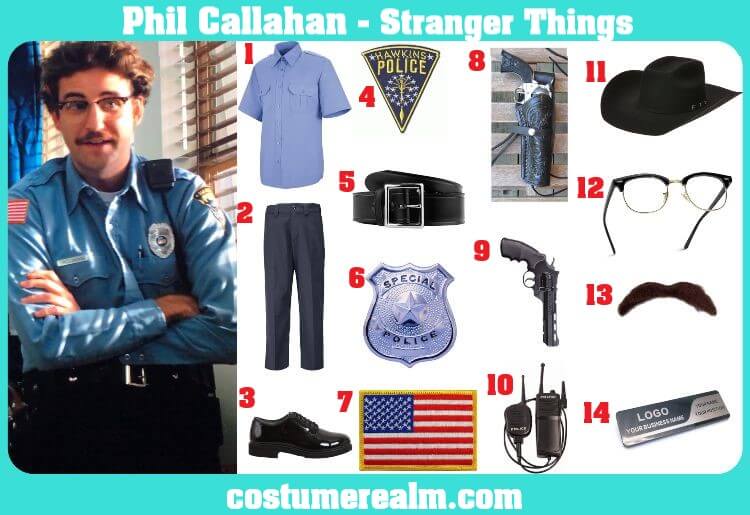 You need the following items for your Officer Callahan Halloween costume:

How To Dress Like Officer Callahan From Stranger Things 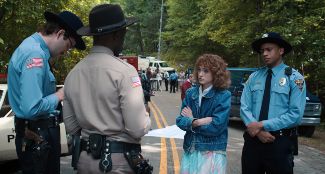 To dress like Hawkins police officer Callahan, you need the products we have prepared for you. By the way don't forget to get the cowboy hat, Callahan's coolest accessory. 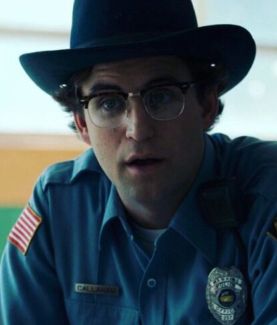 Phil Callahan is a recurring character in Stranger Things. He's a police officer with the Hawkins Police Department. He usually works with Chief Hopper and Officer Powell.

Callahan was gullible, easily believing that George Burness had survived his jump into the quarry, as well as the rumors that Hawkins Lab was building "space lasers". He also had a habit of pushing personal boundaries, especially when it came to personal relationships.

He once asked Powell if Hopper and Joyce ever had a sexual relationship, and later, when questioning Nancy about her relationship with Steve, insinuated that they did more than "just talk."

Callahan accompanies Hopper to Hawkins Middle School, where they question Mike, Lucas, and Dustin about Will's disappearance. When Mike mentioned Mirkwood, Hopper asked Callahan if he had ever heard of it, to which he replied that it appeared to be made up. The boys then informed them that Cornwallis and Kerley had met there.

Hopper and Callahan, along with Officer Powell, began searching for Mirkwood. During their search, Hopper came across Will's bicycle. Callahan wondered if maybe Will had fallen off his bike and been injured, but Hopper thought that was odd and said he carried his bike home instead of leaving it there. The three officers took the bike back to the Byers and searched the home for any sign that Will had managed to get home the night of his disappearance. While Hopper was busy inspecting the shed, Callahan finally managed to get his attention. Hopper then told Callahan to call Flo to organize a search party.

While participating in the search party, Hopper met briefly with Callahan and Powell to discuss if they had found anything. After Hopper moved on, Callahan inquired if Hopper once had a sexual relationship with Joyce, but Powell ignored him.

Officials continued their search in the quarry. As Callahan stood at the edge of the cliff, Hopper advised him to retreat. Callahan said he could make the jump and recounted how George Burness survived a drunken bet. Hopper then got a call from Flo telling him to go to Benny's. When they got to the diner, officers found Benny's body, which appeared to be a suicide. The discovery, along with the missing Will Byers case, prompted Callahan to comment that Hopper needed to "feel like a big city cop again."