James "Jim" Hopper, portrayed by David Harbour, is a major character in the first, second, and third seasons of Stranger Things.

Hopper was a police chief in the small, sleepy town of Hawkins, Indiana, where he led a carefree life - yet was afflicted by a troubled past. After the young son of an old friend mysteriously disappeared, Hoppers life became infinitely more complicated.

As events unfolded, he learned of Eleven, a young girl whom Hawkins Lab was experimenting with because of her inherited abilities. However, to save Will, he had to give up her whereabouts, a decision he would regret.

In UK ? You can get Jim Hopper Costume Items HERE

Other Outfits Worn by Jim Hopper in Stranger Things Season 3 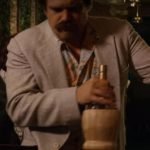 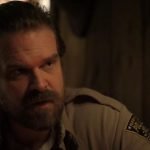 Eleven and Hopper make a great halloween couple especially for fathers and daugthers. 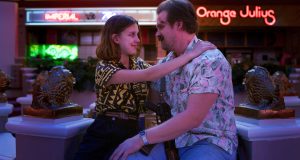 As his captor in search of more information about the Russian's plan, Hopper was quite hostile to Alexei most of the time. He often mistreated him, occasionally physically attacking him and mockingly calling him "Smirnoff" rather than his real name. Hopper would also avoid talking to Alexei until they reached Murray Bauman's residence, often berating Joyce for trying to communicate with him despite the language barrier.

About Jim Hopper From Stranger Things

The loss of his daughter and his family life made Hopper emotionally restrained and cynical. To relieve his pain, he regularly drank alcohol, smoked several cigarettes a day, and developed an addiction to anxiety medication. Instead of making real connections to humans, he slept with several women whom he never contacted again.
Although he was a police chief, he did not care about his job because he regularly slept and showed up late, treating the cases he became aware of indifferently. It was not until Will Byers was missing, and it turned out to be a government cover-up, that he took care of the proper execution of his work, as he had a personal interest in the case.

After discovering Eleven and taking her into his cabin as her new home, Hopper became very sympathetic and responsible, which is why they soon made a father-daughter bond. To ensure her safety, and to fear losing her like his daughter, Hopper moved stubborn wires around her position and had no choice but to forbid Eleven leaving the cabin. His concern for her was so intense that one day he became angry with her for putting herself in danger, an act he regretted. He confirmed this later and asked for forgiveness.

His sense of duty did not go away even during the time together, as he frequently checked Will's condition, helped him, and investigated the cause of Hawkins's unusual incidents. Hoppers empathy for Eleven was the reason why he helped her with the help of Dr. med. Owens later made his adoptive daughter.