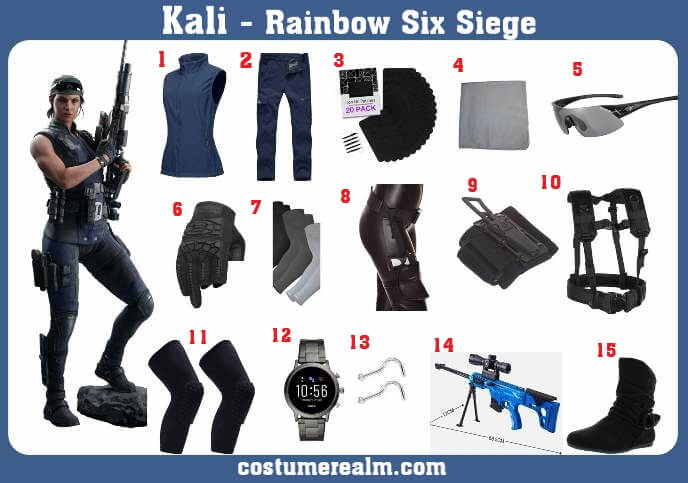 You need the following items for your Kali from Rainbow Six Siege Halloween costume:

How To Dress Like Kali From Rainbow Six Siege 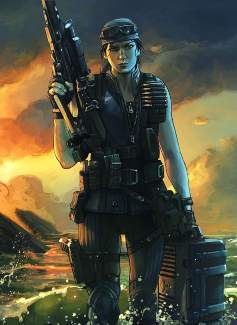 Kali's Combat Outfit: As an attacking operator, Kali's outfit is light but operational. She wears a sleeveless zip-up vest in blue and black. She also wears matching pants. Her bandana gives her an American soldier in Vietnam look. That look is completed with her huge CSRX 300 marksman rifle. 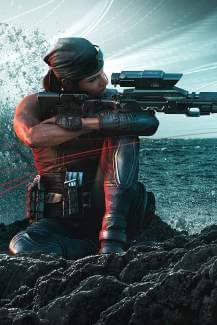 Kali had wealthy parents and was destined to achieve her goals from a young age. That confidence was taken to the extreme in her attempt to join the military. Her interest in martial arts prompted her to enlist, but she quickly learned that women were not allowed to serve in combat units. For all her money and all her social influence, she had found an obstacle between herself and something she wanted, and it wouldn't budge. After leaving the military, she formed her own Private Security Company to operate within the borders of India and then a Private Military Company, NIGHTHAVEN, to operate abroad. The success of her company is largely due to the inventions of Anja "Osa" Janković, who appointed Kali to lead NIGHTHAVEN's R&D department, Quantum Concepts & Robotics.

As a child, Kali got everything she wanted without any effort or attention. She is both ambitious and arrogant, but not without merit. She excels as a leader, largely because she pushes the people under her command beyond their psychological and physical limits in order to reforge them. The fact that those who complete their training are then inducted into an inner circle — a society of protectors, as she likes to call it — little distinguishes them from notorious criminal overlords. And yet, if I consistently believe that everyone has something to teach, I cannot ignore their methods.

Does Kali have any sense of nationalistic pride? That is hard to say. For the ultrarich, borders are just suggestions. Yet, their adoption of the name Kali and their ruthlessness towards those who pass through them imply a connection with their ancestral lands. I suspect this lack of clarity as to her motivations has already put her at odds with Specialist Eliza “Ash” Cohen, but that's to be expected. Cohen is someone who lives by very strict rules, and Kali's very existence challenges many of Cohen's beliefs.