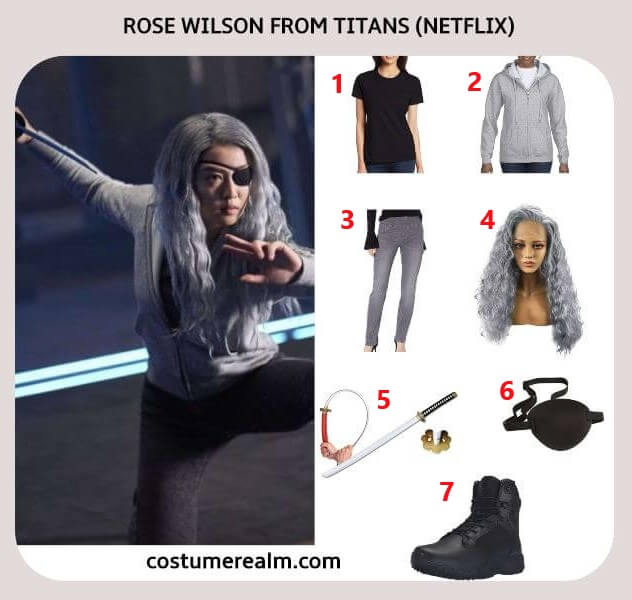 You need the following items for your Rose Wilson Halloween costume:

Dress like Rose Wilson from Titans (Netflix); Rose Wilson is the daughter of Slade Wilson and the sister of Jericho. With her father's education, Rose became a qualified assassin. She put on a leather suit similar to Slade's and took the name Ravager. 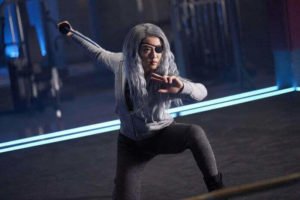 Rose Wilson was born to Slade Wilson and Mei after a one night stand in Kansas City. Slade was married to his wife Adeline at the time, which is why he decided not to be part of his daughter's life. However, he made sure she was in good hands and paid for her house, her bills, and even the membership of her mother and stepfather Gary in a country club.

As she got older, Rose noticed that she had accelerated healing, which prevented her from being hurt. After confronting her mother about her biological father's identity, she quickly found him. Although Slade initially rejected his daughter, he changed his mind and invited Rose to live with him. He gave her a suit similar to his own Deathstroke uniform and trained her in battle. He finally told her about her half-brother Jericho and how he was preparing her to help him kill the titans he believed to be responsible for his death. He instructed her to go undercover and infiltrate the group on the pretext that he was chasing them, and even let Rose sacrifice her left eye for the charade.

Rose is more of a loner who wants to fight a lot herself and even refuses to give Dick Grayson a helping hand when he pulls her off the street. Even when she took the phone she was given, she only took it to get Dick off her back. However, Rose has moments when she is friendlier to them, for example when she meets Rachel Roth and immediately connects with her. Rose repeatedly shows that she has a very sarcastic sense of humor and often discusses her past in a very sardonic and humorous way.

However, she can show a very cold side, like during the kidnapping of Jason Todd, since she only cared about cereals while everyone else was concerned.

It later turned out that she had been working secretly as an infiltrator for her father, in a twisted form of devotion and loyalty to him. But after getting closer to Jason, she starts taking care of him, enough to break the bond with her father and show that she's decent.