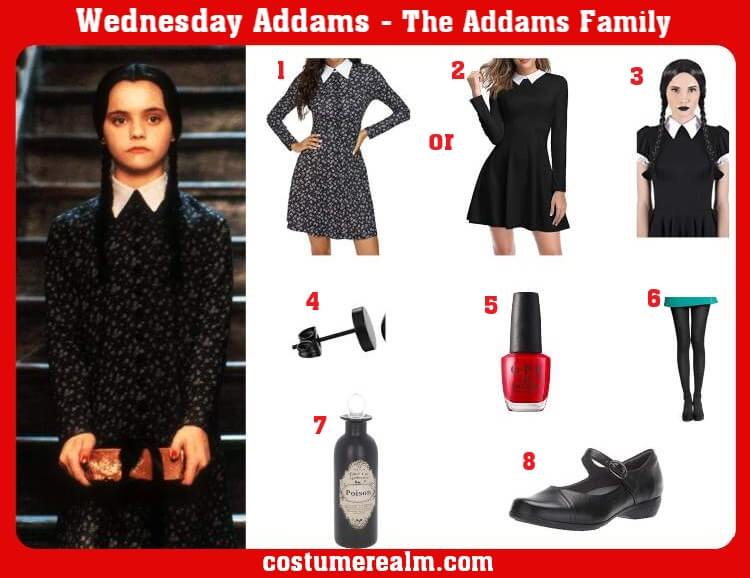 You need the following items for your Wednesday Addams Halloween costume:

How To Dress Like Wednesday Addams From The Addams Family 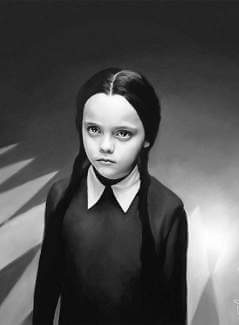 Wednesday Addams Wig: Except for the Broadway musical in which she has short hair, Wednesday has long braid hair in all The Addams Family versions. If you have black and long enough hair that you can braid you won't need a wig, otherwise just get a Wednesday Addams wig. 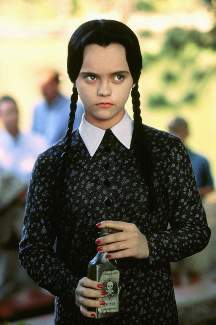 Wednesday Addams is a fictional character from American cartoonist Charles Addams in his comic book The Addams Family. The character has also appeared on television, in movies, and in Broadway musicals.
In Addams' cartoons, Wednesday is originally a pale, dark-haired, grim-looking little girl who is fascinated by death and the macabre. She seldom smiles.

She is much more beautiful in the 1960s, although her favorite hobby is spider breeding; she is also a ballerina. Her favorite Wednesday toy is her Marie Antoinette doll, which her brother guillotines. In the pilot of the television series, she is said to be six years old. In one episode, it is revealed that she has several other headless dolls as well. She also paints pictures and writes a poem dedicated to her favorite spider, Homer. Wednesday is deceptively strong; She is able to bring down her father with a judo hold.

In the 1991 film, she is portrayed closer to the original cartoons. She shows sadistic tendencies and a dark personality, shows a deep interest in the Bermuda Triangle and an admiration for an ancestor who was burned as a witch in 1706. In the 1993 sequel, she was even darker when she tried to kill her younger brother in puberty and burned Camp Chippewa.

In the 1990s animated series and Canadian television series The New Addams Family, Wednesday retains her looks and love of darkness and torture.

In the Broadway musical The Addams Family: A New Musical, she is 18 years old and has short hair rather than long braids in her other appearances. Her darkness and sociopathic properties have been toned down and she loves Lucas Knieke.