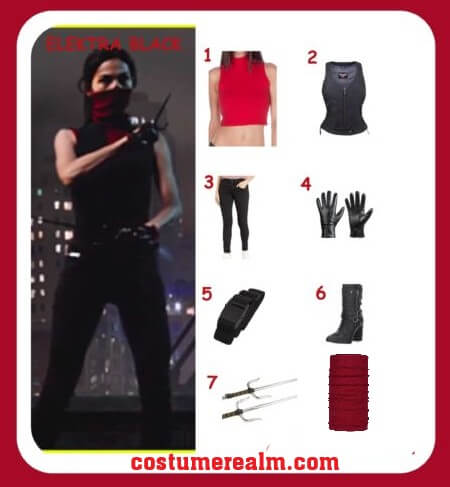 You need the following items for your Elektra Halloween costume: 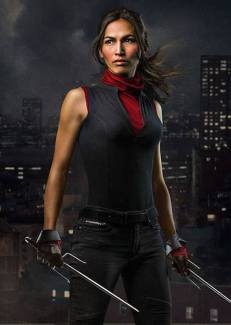 Elektra's Outfit: As an Assassin, Elektra dresses up accordingly.  The main color of her outfit is black, a black combat vest and black jeans, with a dark red undershirt.

Elektra Natchios is an assassin who was trained under the stick to join chastity. She fell in love with Matt Murdock during a mission for Stick to bring Murdock into the organization. After years of absence, she returned to his life and put her beliefs and methods in conflict with his own. It later turned out that she may be the black sky who is supposed to be leading the hand.

Elektra worked as a bounty hunter and assassin for years. After signing a contract in New York City, she crossed the path with the blind adventurer Daredevil, whom she met as Matt Murdock. They teamed up to fight Bullseye, who went mad due to a tumor.

Elektra proves to be a very confident woman in both her skills and looks when she once told Matt Murdock that every man she has ever met wanted to sleep with her. This has led to her being arrogant at times because she believed she was superior to Stick.

However, Elektra states that she is alone in the world and believes that she and Murdock are kindred spirits as she regards him as the only person who understands her for who she is deep down. She was deeply upset when he refused to kill Roscoe Sweeney, claiming, "I thought you understood." Elektra also had a habit of getting bored easily, which Murdock picks up on when they first met. As such, she has developed a fun-loving, insightful, and wildly unpredictable personality and is more than capable of having a good time during her crusade with Daredevil and enjoying both the combat and the physical challenge it entails.

Elektra grew up chastity for most of her life and learned to be the perfect murderess. She can be cold-blooded to her enemies and enjoys killing them; She did this for the first time when she was twelve, and it did so in self-defense, but admits that she loved it. She doesn't have Murdock's moral compass, but at the same time, she seems to respect him for his refusal, while Stick would humiliate him for it. Elektra thinks of her goals first and foremost, with little sympathy for others and little care or even knowledge of breaking the law. For example, to aid in Murdock's case, she forced a confession from Doctor Gregory Tepper, but her involvement rendered his confession completely useless, and after killing a hand-assassin she believed it would absolve her of any self-defense punishment who corrected Murdock's favorites.