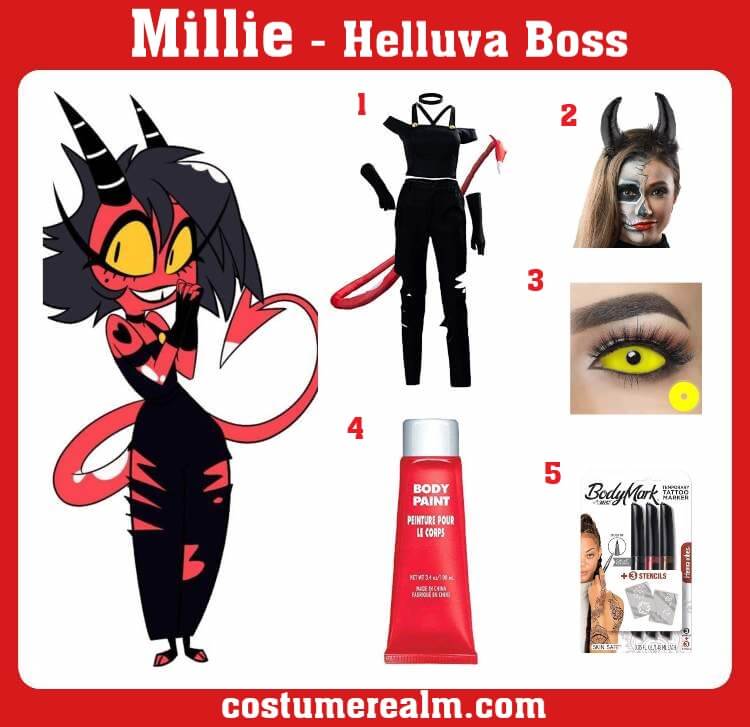 You need the following items for your Helluva Boss Millie costume: 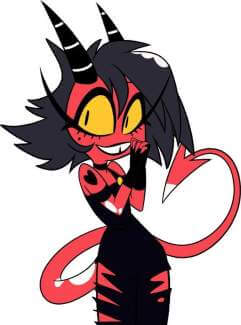 Millie Costume: Her usual outfit consists of a simple black collar, a black crop top with gold buttons where the straps meet at the top of the torso, fingerless black gloves, ripped black pants, and black shoes that don't cover her hoof toes.

Millie Horns: Just like her mom, she has two black horns with three thin white stripes and grayish-black hair worn in a messy bob style and bangs that cover half of her right horn.

Millie Tattoo: Millie has a black heart-shaped tattoo on her left shoulder and two white spots on the inside and outside of each of her elbows. 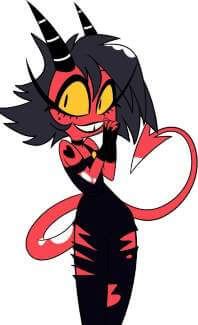 Millie is a short imp with a long demonic tail with white markings. She has red skin, eyes with yellow scleras and black pupils, and long black eyelashes that protrude from the sides of her hair.

Much like her mother, she has two black horns with three thin white stripes and gray-black hair worn in a messy bob style and bangs that cover half of her right horn. It has a nice spot on the left cheek and a gap between the front teeth.

Millie's head is noticeably more human than many other goblins without the pointed upper lip. Their teeth also usually appear shallower than the sharp, conical teeth that most demons have.

Millie is very lively and cheerful. Often with a smile on her face and rarely standing still, she is clearly extroverted and not afraid to speak up. Whether it's to express your excitement or to take out a colleague.

Since Millie is the bruise for Blitzo's co-worker and seems to enjoy her job, it can be assumed that she is tough and very violent too. According to Moxxie, she is aggressive both in the "sack" and in her job. In "Murder Family" it seemed very unlikely that she would kill a family. She just cared if this was what the client wanted and showed her commitment to her job. Even so, she cares a lot about her husband and apparently her family. She has a childish fondness for Loo Loo Land, sparked by family memories of going there as a kid, and is easily delighted with all of the merchandise. She can also get very jealous when unable to attend the Harvest Festival games.

In "Spring Broken" and "The Harvest Moon Festival," Millie is shown to become quite vicious when someone harms Moxxie until she goes almost wild in the later episode. The final episode also shows her being a bit defensive about her job, which seems pretty annoying when someone implies that freelance work doesn't get paid well.