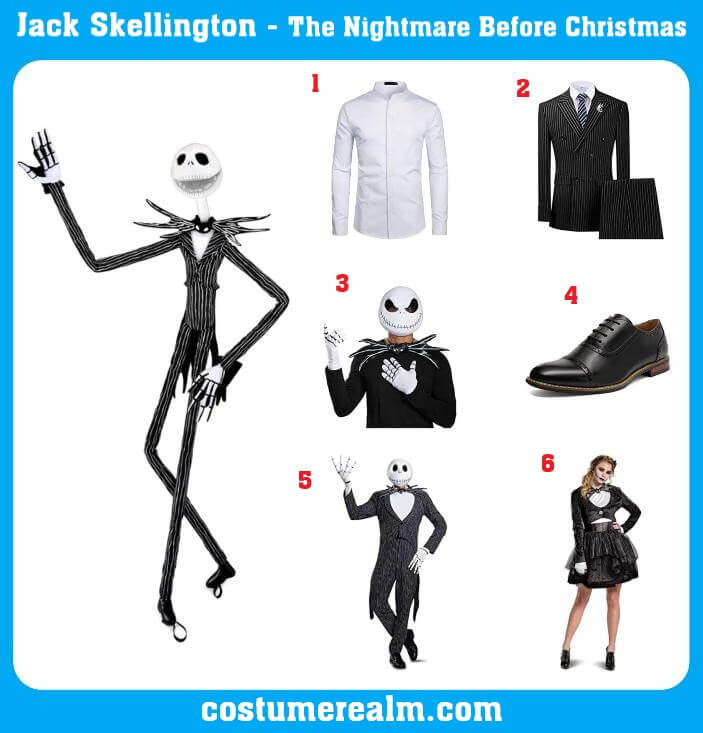 You need the following items for your Jack Skellington Halloween costume:

Dress Like Jack Skellington From The Nightmare Before Christmas 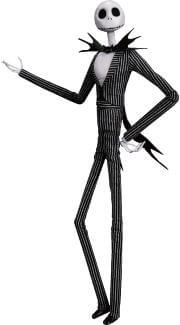 Jack Skellington Suit:  Jack wears a pinstripe, skinny fit, black & white formal tuxedo. He doesn't wear a shirt beneath the tuxedo jacket, however, because of his skin color, it looks like he wears a white shirt.

Jack is a tall and very slender white skeleton with a crossed mouth and bony fingers. He wears a formal black and white pinstripe tuxedo with a bat-themed bow tie. When Jack temporarily took on Santa's role in handing out gifts, Jack wore a Santa suit sewn by Sally with a long, fake beard, but borrowed Santa's Santa hat to wear himself. The suit was badly burned, charred, and torn after Jack was shot down by military artillery and Jack tore the remains off to reveal his normal, undamaged clothing underneath when he reappointed himself Pumpkin King.

Jack is a gentleman, just graceful and patient, and he can usually be trusted to do what is in everyone's best interests.

While his logic is solid, his reasoning can sometimes be questioned - he was pretty thorough on his Christmas research but decided to stick with what he and his friends knew when he decided to give Santa the year off and it for to take him over.

He was also unaware of Sally's feelings for him for most of the story, which shows that he is unaware of people's feelings despite being one of the crafty citizens of Halloween Town. This is confirmed by the fact that he barely realized Santa's plight when they first met.

It seems that Jack could be a little naive at times after showing that he trusted Lock, Shock, and Barrel enough to think they would just bring him Santa Claus without causing trouble, even though they were also dating Oogie a blanket rumbled because he was doing it. He only realized what he had done on Christmas Eve until it was too late.