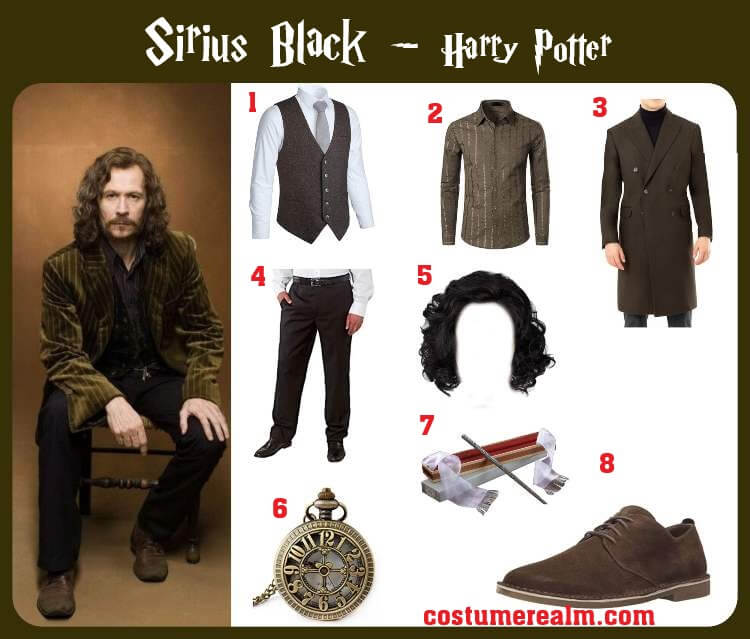 You need the following items for your Sirius Black Halloween costume: 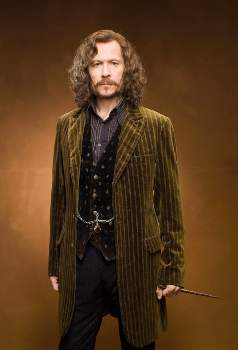 Sirius Black Outfit: Sirius Black's outfit is mostly of brown and black tones. He prefers wool blend pieces that look old yet fashionable.  You need a brown jacket, a brownish dress shirt, and a brown or black suit vest and brown or black dress pant which also needs to be wool.

Sirius Black Accessories: To complete your Sirius Black Halloween costume don't forget an antique pocket watch, his wand, and brown oxford shoes. You may also need a layered wig if you don't have long hair. 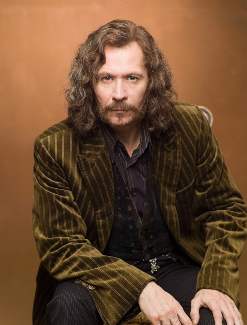 Sirius was a tall, well-built, handsome man with fair skin, medium-sized, shiny black hair that sometimes appeared bright in the sun, showy gray eyes, and an air of "casual elegance"; Harry also noticed that Sirius always had a slightly haughty look on his face as a teenager. This remnant of aristocratic beauty and haughtiness is apparently an attribute passed down from the Black Family. When Harry stepped into Snape's memory, he saw a sixteen-year-old Sirius finishing his exams while being pampered by a girl who sat a few rows behind him because of her handsome looks and easy-going but elegant demeanor.

Sadly, like his imprisoned cousin Bellatrix, Sirius' beauty suffered from the depression and abuse he experienced during the twelve years in Azkaban. As a result, Sirius had grown prematurely older than a man in his thirties. He had a slender, sunken face, waxy skin, yellow teeth, and long, matted hair. Harry thought he looked like a corpse. In November, after his escape, he visited Harry in the fireplace of the common room and is said to have short, clean hair and a fuller, younger face, although his physical appearance had not yet fully recovered from his incarceration.

Unfortunately, the next spring his condition worsened and he returned to a condition only slightly better than a year ago: unshaven, with a faint smell of stale drink around him, and he didn't bother to change at night. He was also branded with a number of tattoos on his chest and arms.

Death, however, brought him back to the height of good looks and vitality - his spirit was described as "tall and handsome and much younger than Harry had ever seen him in his life". He hopped with a slight grace, hands in pockets and a grin on his face. ""