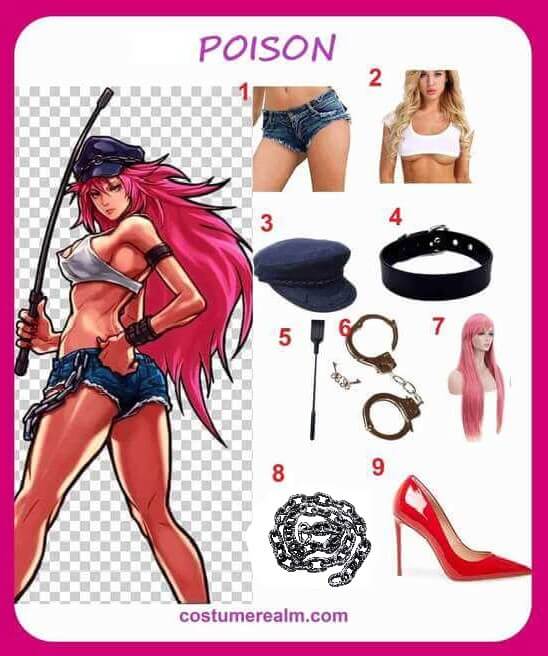 You need the following items for your Poison from Street Fighter Halloween costume: 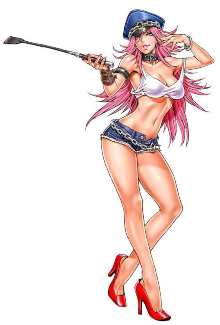 Poison Hair: Poison has tail bone length pinkish-purple hair. You will probably need a wig for your Poison cosplay. 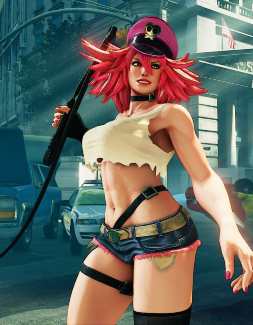 Poison has long, pink-purple hair and wears a black hat with chain links, a tight white crop top as well as tight denim short shorts and high heels. She also has a chain around her waist, a black collar with rivets on the neck, and a pair of handcuffs hanging from the chain around her waist. Since Final Fight Revenge, she has usually been wearing a riding crop, which she uses as a weapon. This appearance later became her "nostalgia" costume in Street Fighter V.

There's also a poison palette swap called Roxy. Roxy is identical to poison, although she has red-orange hair instead of purple and is less healthy. According to the Capcom Classics Collection, Roxy came from the same orphanage where Poison grew up. It is also mentioned that she looks up at Poison.

In her concept art in Street Fighter V, Poison's outfit has changed slightly. Her tight tank top has been replaced by a bandaged shirt that covers the top and has a single left long sleeve underneath. She also has a white elbow band on her left elbow. Her short denim shorts are now black, which means that she also sees the lines of her red thong under her shirt and keeps a gold ribbon on her right thigh and red high heels.

In her full appearance in Street Fighter V, Poison finally cuts her long hair into a shoulder-length, tapered coif bob. Her primary appearance has been updated because her peaked cap is now dark pink and has a gray skull pattern in the middle. She keeps her tight white tank top and a pair of skimpy denim shorts "Daisy Dukes" from her main outfit, since her denim shorts now had pink ribs on the edges and right black straps on her shorts and a black side belt that almost resembles a black thong. She now has a single black long fingerless glove on the right and a single black stocking on the left and her high heels are now dark pink. She is now wearing a long black whip instead of a riding crop.

In her fairytale costume, she wears a white, sleeveless cocktail dress that shows a full cleavage and was fastened with a black belt at the waist and a black panties underneath. The edge of her skirt goes through her left knee and is wearing white high pumps. She maintains her long hair from her previous look to show her fringes on both sides, was tied up with a high ponytail, and wears light gold, heart-shaped sunglasses.

Her second alternate costume, which is her fighting costume, is a gray and white striped formal dress that resembles her fairytale costume, but has a single sleeve on the right side.