You need the following items for your Gwenpool Halloween costume: 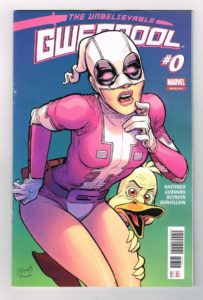 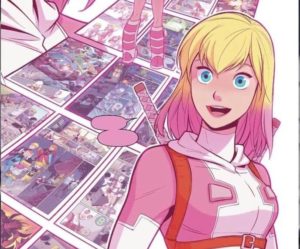 Gwen Poole was originally living in a universe that was not unlike ours, a place where all superheroes and super villains were fictional characters, manifesting themselves in comics, movies and other media. Gwen's difficulty finding a job after graduating from high school, and the fact that all her friends had moved away, made her dive into fiction to escape her reality and dream of a better world, getting lazy and apathetic, to the chagrin of their parents

Gwen and her brother Teddy ended up inexplicably in the Prime Marvel Universe. However, both separated on arrival and believed that the other had not survived the transition. Gwen did not want to be down as an "extra" and went to Big Ronnie's Custom Battle Spandex to stand out from her own costume. The tailor Ronnie followed, but she also misunderstood Gwen's form and thought the young girl had the code name "Gwenpool."

Gwenpool's first mishap was stealing a virus from the black cat and selling it to Hydra for a quick buck. He believed the Avengers could handle any kind of consequence. As Gwenpool tried to kill Howard the duck, who had been forced by the black cat to find the thief, he made Gwen realize the flaw in her casual posture, which was due to the fact that Gwen the life of the inhabitants of the Marvel universe undervalued, which they believed were nothing but fictional characters. Gwen fixes her misdeeds by invading a Hydra facility and clearing the virus with Howard's help.