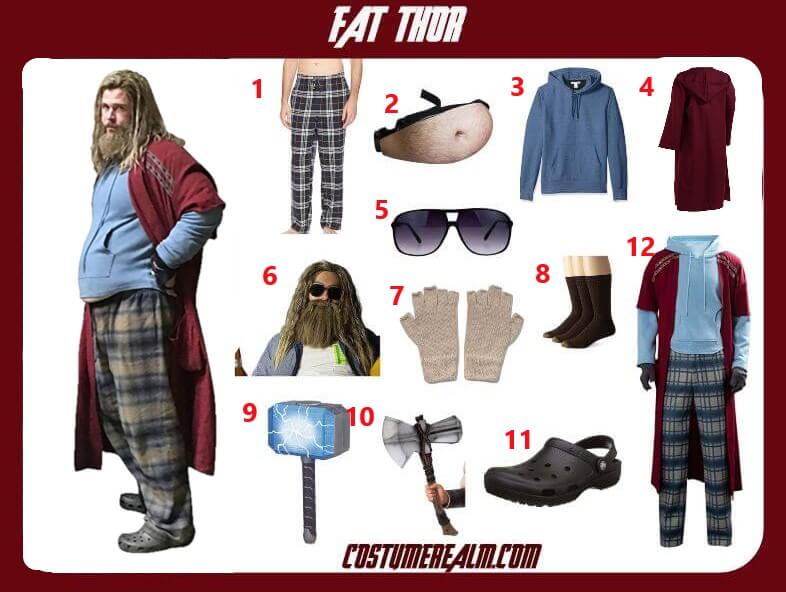 From UK ? See all Fat Thor Costume Items on our Amazon.co.uk Influencer Page

Fat Thor ( Chris Hemsworth) aka Bro Thor ( a reference to Big Lebowski ) from Marvel's Avengers Endgame;  is no where close to what we are used to see Thor as. The God of Thunder is depressed after defeat by Thanos.  He now spends his time in New Asgard playing Fortnite, drinking bear, eating pizza and unleashing his rage upon little trolls on discord. In order to complete your Fat Thor Costume grab a beer bottle and a slice of pizza.

Thor Odinson is the god of thunder from Asgard, the former king of Asgard and New Asgard and a founding member of the Avengers. When his irresponsible and impetuous behavior triggered a conflict between Asgard and Jotunheim, Thor was denied the right to become king, deprived of his power and banished to Earth by Odin. While banished to Earth, Thor learned humility, found love for Jane Foster, and helped save his new friends from the destroyer sent by Loki. Because of his selfless victim, Thor recovered in his father's eyes and regained his strength to defeat Loki's genocide plans. Thor Odinson has changed tremendously at Avengers Engame. We is seen as depressed, drunk, lazy and a game addict.