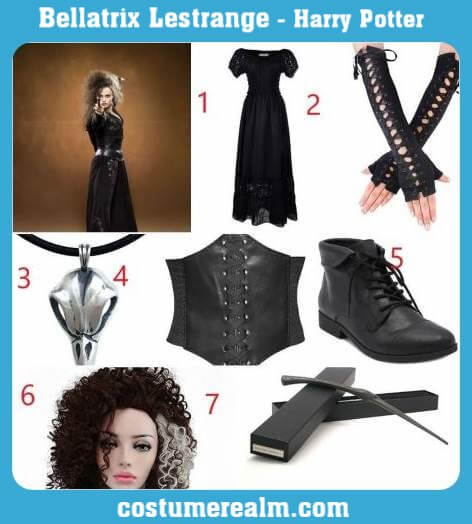 You need the following items for your Bellatrix Lestrange Halloween costume:

From The UK? Click here for The UK Links

"Potter, you cannot win against me! I was and am the Dark Lord's most loyal servant. I learned the Dark Arts from him, and I know spells of such power that you, pathetic little boy, can never hope to compete!"

After graduating from Hogwarts, Bellatrix became a Death Eater. She was fanatically loyal to Lord Voldemort and was among the most dangerous and sadistic of his followers. All the Black sisters married pure-blood wizards, except for Andromeda who married Muggle-bornTed Tonks and was disowned by the family, who were forbidden to talk about her.

At the end of the First Wizarding War, while searching for information on Lord Voldemort; Bellatrix, her husband Rodolphus Lestrange, her brother-in-law Rabastan Lestrange, and Barty Crouch Jr took part in the torture of the Aurors Frank and Alice Longbottomdriving them insane. They were caught and sentenced to life imprisonment in Azkaban for torturing the two Aurors. She finally escaped from Azkaban in the 1996 mass break-out, along with nine other Death Eaters.

Bellatrix was sentenced to life in Azkaban with no chance of release. For her actions, she later described herself as the Dark Lord's most loyal follower and even Lord Voldemort, whom she admired the most, gained a considerable amount of respect for her.

Her fifteen years in a maximum security cell took a toll on her already unstable mentality, as well as hollowing out her appearance until only the faintest traces of her familial beauty remained. 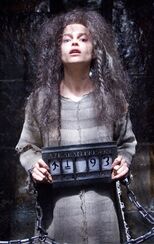