Akuma is a video game character and a recurring antagonist of the Street Fighter series, who appears for the first time in Super Street Fighter II Turbo as a hidden boss. He is an emotionless and powerful warrior who is obsessed with mastering the Satsui no Hado. 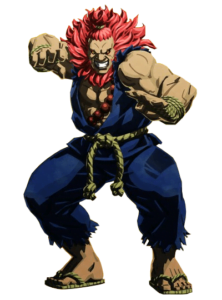 Akuma usually wears a dark gi with sleeves off (similar to Ken and Ryu); It is often blue, black or gray, but varies depending on the series or graphic. He has red hair, sharp, pointed teeth and is often barefoot, although he wears brown sandals in some games. Depending on the game or artwork, he wears either a black belt at the waist or a piece of rope. He either wears brown training gauntlets over his hands or else wraps his hands with a rope (again depending on the source). He has tanned skin and purple eyes and wears the beads of his late master Goutetsu around his neck, with a visible black "sky" (天, ten) kanji on the middle pearl in some video games. In Street Fighter Alpha: Generations he had eyebrows at a young age.

In his graphic for his Street Fighter V-profile, Akuma's hair is completely white and full-grown. He wears a dark yellow loincloth with a white sash on each side, shirtless, and maintaining his gray karate pants. This is a contrast to the outfit of his older brother Gouken.

In his appearance in Street Fighter V his hair has grown a lot and resembles a lion's mane, although he retains his usual clothes. He also tied the hair on his head to a braid. He also wears his prayer beads like a sash. That of Shin Akuma in Capcom vs.. SNK 2 used 神 人 "shin" kanji can be seen on his back while performing Shun Goku Satsu.

His hair is slightly gray in the Street Fighter III series, suggesting that Akuma, though seemingly inhumane, is still physically aging.