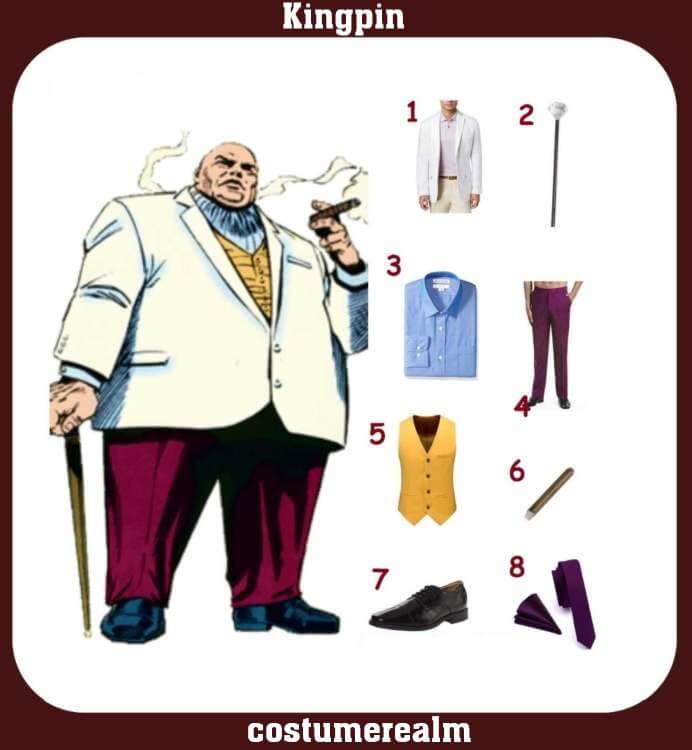 You need the following items for your Kingpin Halloween costume: 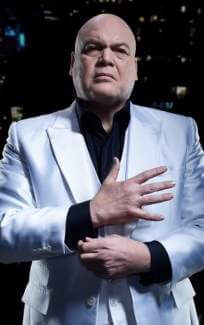 Kingpin's Suit: Wilson Fisk runs his crime kingdom like a businessman and he dresses up accordingly. He mostly wears a white or black dress suit in the movie version and a white blazer and purple dress pants in the comics version. In comics, he also wears a blue button-up shirt and a yellow dress vest.

Kingpin's Accessories: To complete your Kingpin Halloween costume don't forget a walking cane with a diamond head and a fake cigar. 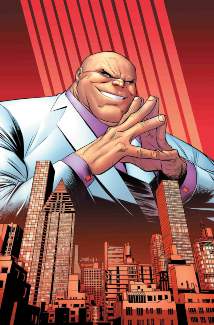 Wilson Fisk is a businessman, and he is interested in the future of New York City by controlling the crime that has conflicted with some of his partners who cheated on him. His attempt to destroy and rebuild Hell's Kitchen was ruined when his criminal activities were passed on to the FBI, which led to his arrest. Fisk's own criminal career didn't end with his arrest. On Ryker's Island, Fisk started building a loyal group of criminals and ran the prison. When he tried to destroy the New York crime competition, Fisk helped the Punisher escape by trying to eliminate competing criminal empires as the new kingpin. This brought Fisk into conflict with Nelson and Murdock, who imprisoned him.

Kingpin is a polite, articulate, and well-spoken man of courtesy and manners. He also expected courtesy from his subordinates because he attacked and sometimes killed those who disrespected him or those who were important to him. Fisk is a man of great sophistication who, despite his poor background, enjoys first-class life. He enjoyed good suits, good food, and classic literature and music. He considered himself a man of honor and always kept his word. Although he can be a brutal, cold calculating machine, he honestly believed that what he did for Hell's Kitchen was fair.

However, when Fisk was provoked, he had an unstoppable, almost animal rage. His aggression was immense and nothing could stand in his way when those close to his heart or his plans for the city were in danger. This was largely thanks to his abusive father, who had taught him to continue beating someone, even if he was bloody and beaten. Fisk's broken childhood had a lasting impact on him and caused nightmares until his late years. He even hallucinated his reflection when he covered the picture of his younger self with blood after he murdered his father.