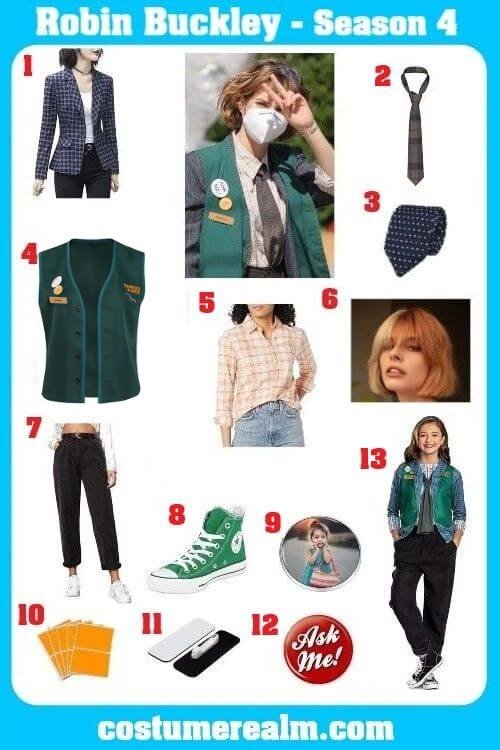 You need the following items for your Halloween Robin Buckley Season 4 Costume: You need the following items for your Halloween Robin Buckley Season 4 Vol 2 Costume:

How To Dress Like Robin Buckley From Stranger Things Season 4 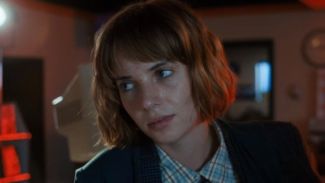 Robin is working with Steve on Family Video this season. If you want to dress like Robin, you should get a check shirt, check jacket, sleeveless green jacket, a tie, high waist jeans, green converse shoes, ask me brooch, Ms brooch, and a name tag. If you want your hair to look like Robin, you can get the wig in the picture. 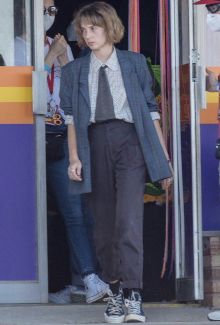 Robin Buckley, portrayed by Maya Hawke, is the main character in Stranger Things introduced in the third season. She is Steve Harrington's colleague and best friend.

In the summer of 1985, Robin began working at the newly built ice cream shop Scoops Ahoy in Starcourt Mall alongside her former classmate Steve Harrington. Robin often made Steve the target of many jokes because of his fleeting popularity and failure to attract female customers.

When Steve and his best friend Dustin Henderson try to crack a Russian code that Dustin overheard over his radio, Robin helps with her many language skills. She finds out that the Russians are using the mall's grocery chains and stores to smuggle supplies into Hawkins, and that the only way to find out what they're smuggling is to crawl through the mall's vents.

The quartet bribes one of the store's customers, Erica, to crawl through and investigate in exchange for free ice cream and discovers that Russians have built a lab beneath the mall to open a portal to another dimension where Steve and Dustin had previously worked closely together. Steve and Robin are eventually caught and taken hostage, where they bond over being outcasts before being drugged by scientists and becoming extremely high.

After Dustin and Erica rescue them and return to the surface, Robin and Steve go to the bathroom to detox. There, Steve tries to admit his romantic feelings for her, only for Robin to slowly explain that she was a lesbian. However, this only makes their friendship stronger and soon leads to Robin along with Steve's group of friends helping to defeat the Mind Flayer. Three months later, Robin and Steve land jobs at the town's Family Video.

In the spring of 1986, Robin is still patiently enduring Steve's tirade about his complicated love life. Robin has a crush on Vickie, a member of the Hawkins High Band, but doesn't know how to act towards her.